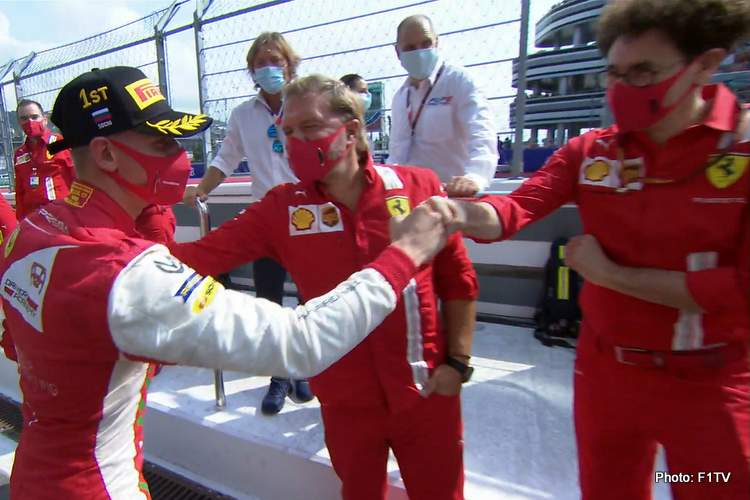 Doubts that Mick Schumacher has the right stuff to have a crack at Formula 1 next year were pretty much dispelled when the Prema driver powered to an impressive victory in the Formula 2 feature race at Sochi on Saturday.

The Ferrari Academy Driver is being tipped to step up into F1 next year with Alfa Romeo, perhaps teaming up with veteran Kimi Raikkonen. There remained doubters but now, after his latest performance, far less one would imagine.

“It’s definitely among the top drives,” beamed Schumacher in the wake of his second victory in Formula 2 – a win that strengthens his grip on the F2 driver’s championship.

As has become a customary feature of his F2 career, Schumacher’s win was borne from a sterling getaway. Starting from third, the German flung his Prema around Jehan Daruvala off the line for P2.

From there, he carefully managed his Pirellis, before a race-winning overtake on the polesitter Tsunoda with 10 laps to go, it was a memorable top-shelf move that revealed signs of a cool, calm and intelligent driver.

Mick continued, “We had good tyre management, both on supersofts and on the mediums, so I’m very, very happy with that. I think Yuki probably pushed a bit too hard at the beginning. That was something we spoke about on the team radio and I felt like I wasn’t going to be able to do that pace for the laps remaining. It proved to be the case.

“Tyre management was a concern for this race, and I think we managed it pretty well to then use Yuki’s mistake in going on to the marbles, and take the move for victory. Afterwards, if you’re in clean air, it’s a lot easier to manage the tyres.”

In the end, Schumacher’s win was dominant, finishing six seconds ahead of next best, thus hard to believe that, at one point in the race, the German thought he’d missed his opportunity.

A move worthy of winning the race 🙌

“I’d thought even earlier to do the move, because Yuki was stuck behind (Artem) Markelov and I wasn’t able to get past. That bunched us all up a bit, and I didn’t want Callum to get too close because I know he’s quite quick usually,” explained the 21-year-old.

“I tried to make the move as soon as possible. After that, Markelov pitted straight away, so that basically then gave Yuki the clean air that he needed in the last two corners.

“I was a bit concerned that I was maybe a bit too far, therefore I had to brake on the outside and wasn’t able to get around to brake in front of him. But, Yuki overshot a bit and then I just used that inside, and the undercut, to try and get around the outside which worked, thankfully.

“I’m quite happy and satisfied with the race and how we managed it with the team. I’m very proud of them,” added young Schumi, who has ticked all the right boxes on his inevitable journey to the top flight and may well be the breath of fresh air the sport needs right now.

Mick now has 186 points and has extended his lead over second-placed Callum Ilott to 18 points. Another FDA driver who also had a strong race, managing to get on the podium, claiming third place by 25 thousandths of second from Luca Ghiott. 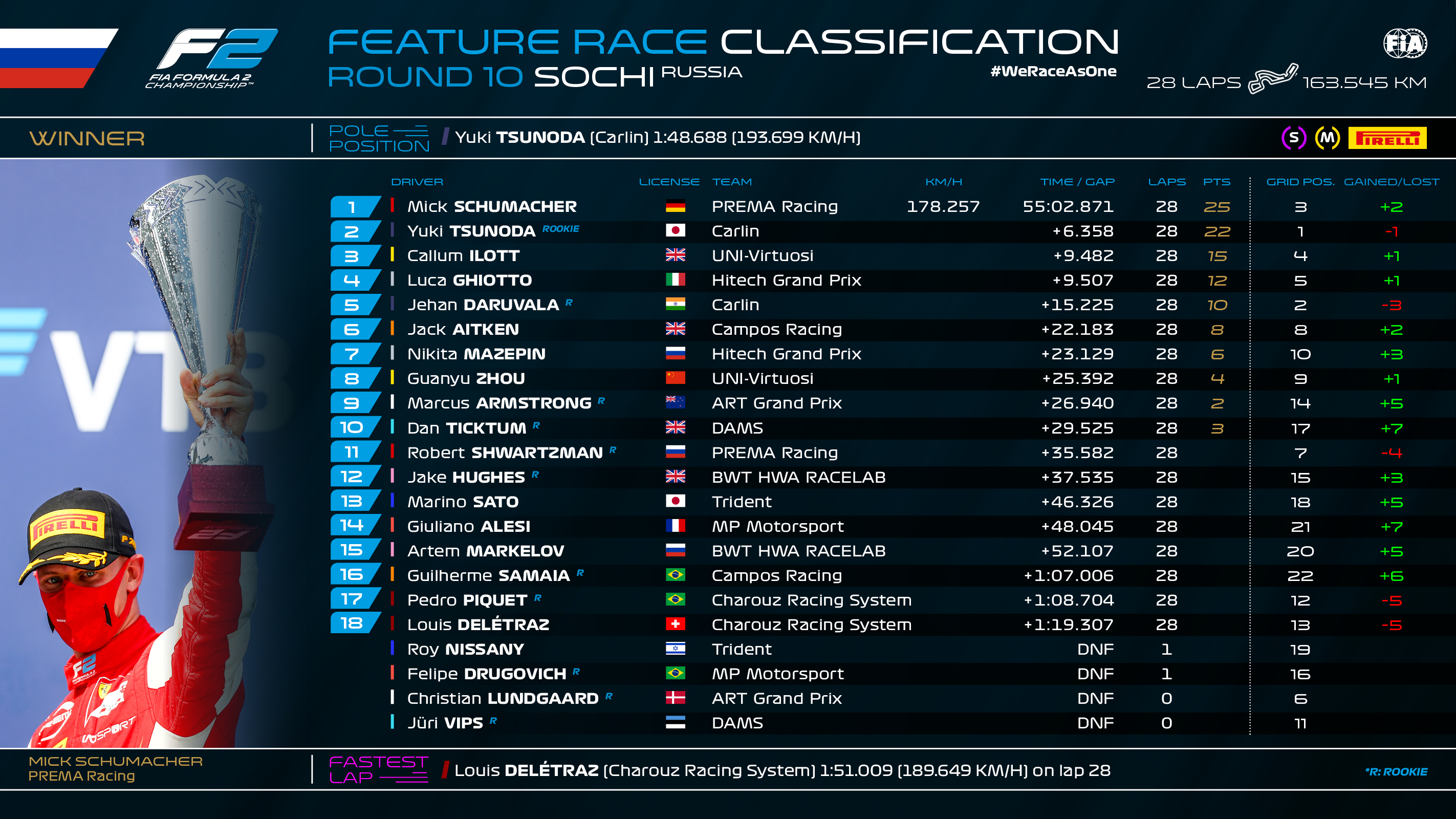 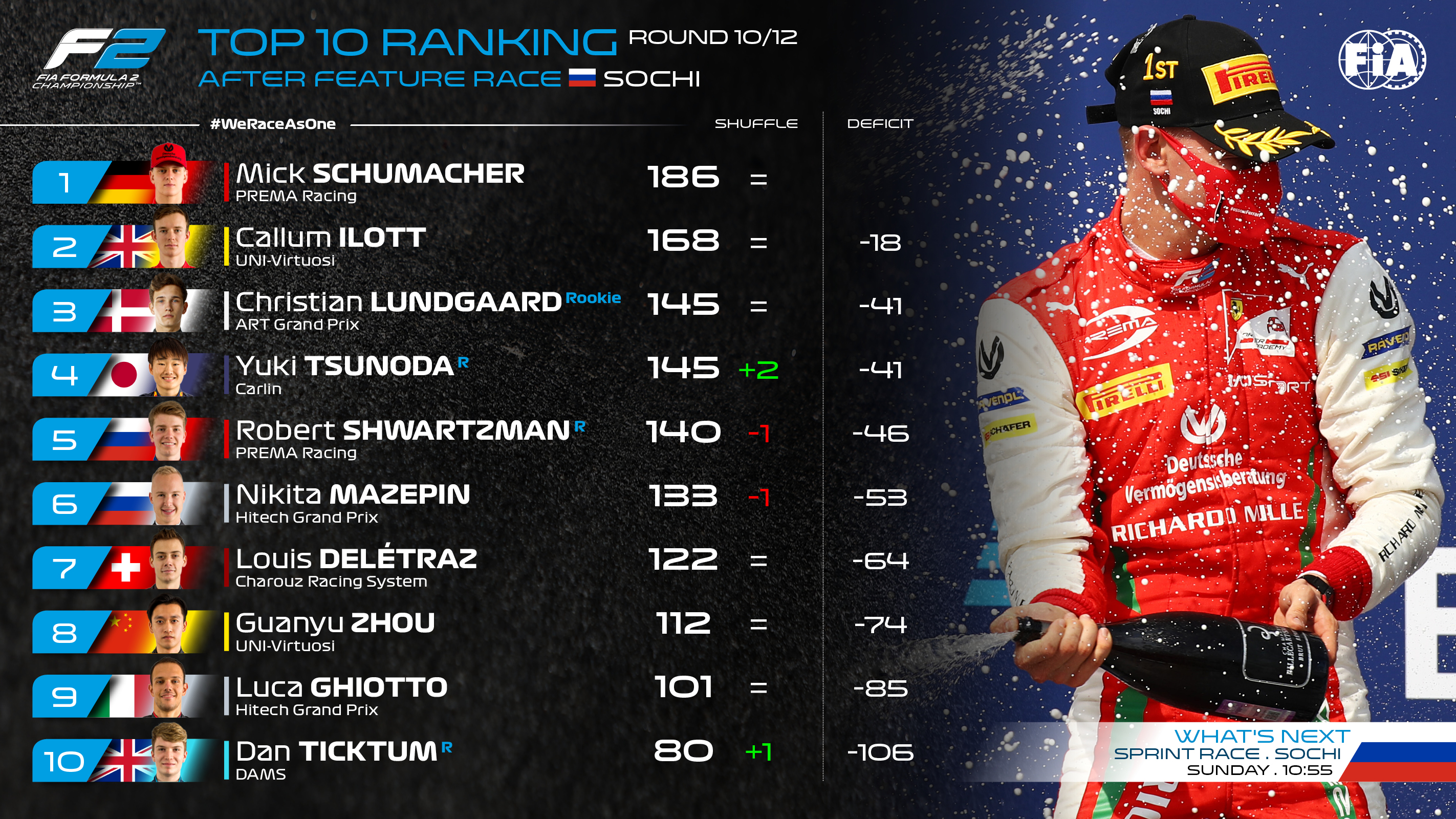