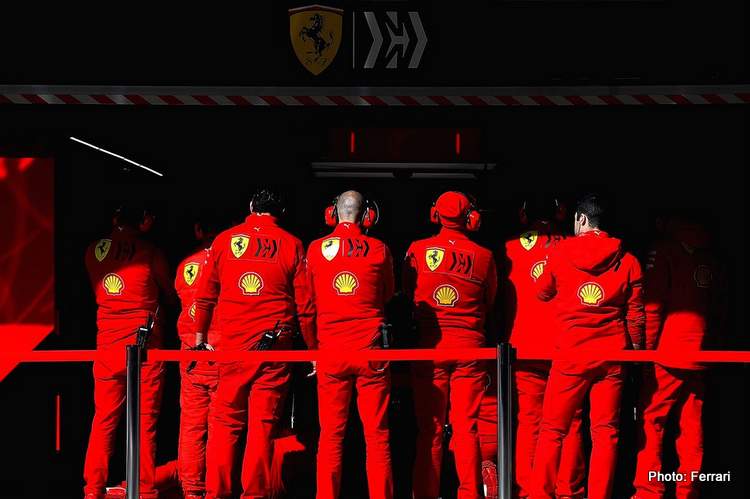 The state of Ferrari is such that their team boss Mattia Binotto and sporting director Laurent Mekies share the arduous task of disseminating bad news for the Tifosi at the end of each day during a Grand Prix weekend.

After another woeful qualifying, this time in Russia, in which Sebastian Vettel crashed while trying too hard and Charles Leclerc did not set the world alight with his P11 effort – last year he was on pole at the same venue, four-tenths of a second faster than Lewis Hamilton with Seb third on that grid.

A year down the road and the Reds are unrecognisable, imprisoned in the midfield with what is expected to be a long-term sentence.

After qualifying, Mekies was tasked to be the bearer of bad news and reported after another miserable day, “We’re unhappy about qualifying for various reasons. Sebastian crashed, fortunately emerging unscathed, but the impact with the barrier did considerable damage to the car, which will require a lot of work by the mechanics to repair it.

“Charles should have been able to get into Q3 but he had a very hectic time in the final part of Q2. In a strange situation like this, it’s difficult for all the drivers to get a clean lap and in fact, only four of them managed to improve their time in the final two minutes.

“Charles managed to start his lap in time, but unfortunately there was not enough of a gap to the car in front and he was unable to improve. For our part, in future, we will try and do a better job of evaluating the available time gap.

“Tomorrow’s race will be long and demanding from many points of view and anything could happen. We will do our utmost to score as many points as possible,” added Mekies.

Hamilton’s pole-winning effort of 1:31.204 was 1.8 seconds faster than the best Charles could muster out of the increasingly ineffective, and decidedly embarrassing, Ferrari SF1000.

“We definitely had the pace to do something good, much better than expected,” said the driver from Monaco. “Unfortunately, we missed our chance, so I’m pretty disappointed, but that’s life.

“It is frustrating that we didn’t make it to Q3 because I really believe that we had the potential to go through today. From the radio communications, I thought I had no margin to cross the line to start the fast lap so I pushed on the out lap and started my quick lap very close to Kvyat.

“There was actually a bit more time available, but we didn’t exploit that, so we need to improve in that area.

“We are starting 11th with a free choice of tyres. I hope that we can benefit from this. The race is tomorrow, points are scored tomorrow and I will give it my all.”

By his own admission, Vettel overdid it, “When I crashed I was trying to improve my time. I hadn’t had a good first sector so I was pushing. It seems that I was going too quickly and so I lost the car. It had already happened in turn 2 and then it happened again in turn 4. I tried to avoid the impact, but I couldn’t catch it.”

Seb is expected to start from 15th, however, the extent of the repairs to his damaged car will determine if he will face grid penalties on Sunday in Sochi.

Times are hard at Maranello.