Bottas: I’m not sure why I couldn’t get closer to pole 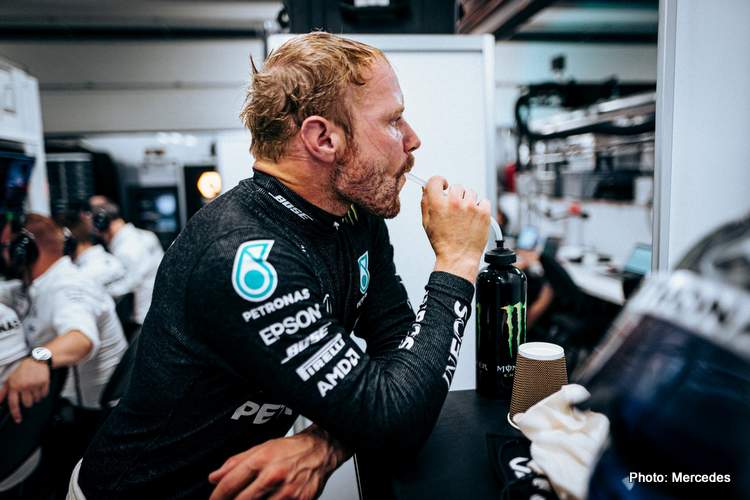 After enjoying the upper hand on his Mercedes teammate on Friday, Valtteri Bottas once again fell short when the chips were down during qualifying for the 2020 Russian Grand Prix on Sunday, the Finn will start from third when he appeared to have the pace for pole.

Valtteri was on fire during the first two free practice sessions, but on Friday morning Lewis Hamilton signalled his intent by going quickest in FP3 and then claiming his 96th top spot start in the afternoon qualifying at Sochi Autodrom.

But the magic time went missing when it mattered, as he explained in the team report, “Valtteri Bottas
It was looking pretty good for me, I felt like I had the pace through Q1 and Q2, and both of those sessions went nice and smoothly. But Q3 was a tricky one.

“I felt like I found some gains but clearly the others found more. On the first run in Q3 the tyres were a bit too cold, so out of the last corner I had a big snap and was already a few tenths down on the run to Turn 2.

“I was waiting for the second run and that lap felt better, there weren’t really any mistakes so I’m not sure why I couldn’t get closer to pole. There are some question marks there, which we’ll need to look into in the debrief and figure out why there was such a gap.

“But P3 is actually a pretty good place to start here and I think I’m on the right tyre as well. I’ve started third here before and look what happened, so I’ll try and do the same. It’s still all to play for,” added Valtteri who needs to start beating the #44 car on a regular basis to keep the title alive.

The Mercedes pit garage were aware that the #77 car had gone off the bubble late in the session, with team boss Toto Wolff revealing, ” Valtteri’s side, we need to investigate what happened because he had a very strong Friday, but FP3 went against him.

“The changes he’d made to the car for Qualifying seemed to be right, but then he lost some performance in Q3. The gap doesn’t do him justice, so we need to look into what happened.

“We’re looking forward to an exciting race, with both drivers starting on different tyre compounds and a long run to Turn 2. Let’s see how it all plays out,” added Mercedes F1 boss whose team have won all six previous Russian Grands Prix.

Track engineer director Andrew Shovlin added, “Valtteri struggled to get the tyres in the right window and unfortunately got pipped by Max on the final run.”