Sainz: Thanks to the mechanics for fixing the car for FP2 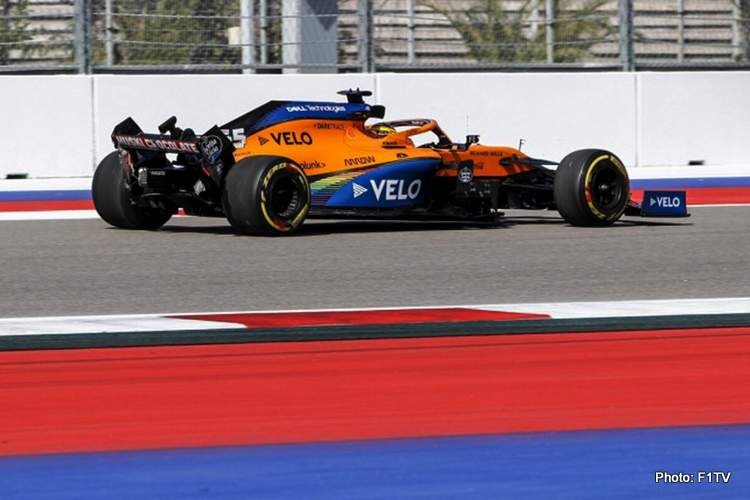 Carlos Sainz was caught out during the early stages of FP1 on Friday, when his McLaren slithered off a dusty track, rear-ending the wall and snapping the back wing on his car but recovered well to end day one of the 2020 Russian Grand Prix fourth fastest.

Apart from losing track time during the morning stanza, the Spaniard did his mechanics no favours with his off and was quick to praise them for their efforts, despite losing much of FP1 in the pits, “I think it’s been a productive Friday with an intense programme in the afternoon.

“Thanks to the mechanics for fixing the car on time for FP2. We completed the tests we needed and the car balance looks closer to the rest of the season so far, which is a good sign after our struggles at Mugello.

“We seem to be back in the mix, but we’ll have to wait until tomorrow to see what we can do in quali,” concluded Carlos in his team report.

In the sister car, Lando Norris was only a tenth shy of his teammate with the fifth-best time suggesting the orange cars could be in the mix for a podium on Sunday should the form carry over to race day.

Nevertheless, the young Englishman was not entirely happy, “Tricky day. FP1 wasn’t ideal. Obviously, we have a couple of new parts on the car, so a lot of it was just aero running and trying to understand how it was performing on track.

“There was a lot of disruption, so FP1 was a bit messy and lacked laps altogether. We tried to make up for it in FP2 and I think we did. I got a bit more comfortable with the car, we made some progress with the set-up and I’m feeling a bit more confident going into tomorrow.

“We’ve still got some work to do if we want to be as competitive as our rivals. On the whole, a tricky day but I’m reasonably happy.”

The team’s racing director Andrea Stella also appreciated his team’s performance on the day, “It’s been a productive Friday despite losing some time this morning after Carlos had contact with the barriers. That required us to change the rear end of his car, which was a great effort from the team in such a short space of time.”