Hamilton: It will grip up and things will be closer 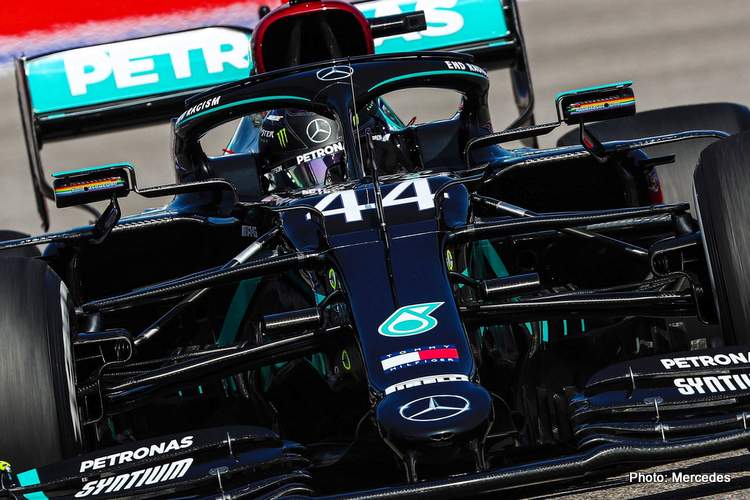 Lewis Hamilton had an out of sorts morning, the Mercedes driver finishing FP1 second last on the timing screens but gathered himself to within striking distance of his pace-setting teammate Valtteri Bottas.

It was odd to see the #44 so low down the order, 2.8 seconds down on the top time in FP1. Hamilton explained, “The day didn’t start very well, as first practice was pretty poor. I had a lock-up at Turn 2 on the Soft tyre and then when I went onto the Hard compound, I completely destroyed them, so FP1 was scrapped.”

“The second session was a lot better, but I wasn’t able to put all the sectors together so it’s still a work in progress: I was a bit down in sectors one and two, but sector three was nice. The grip levels today were pretty low and that made things tricky out here, with a lot of sliding around.”

At the end of the day, the Mercs were again on another level relative to their rivals, Valtteri fastest of the pair with an impressive 1:33.519 table-topping lap time – a quarter of a second quicker than Lewis followed by Renault’s Daniel Ricciardo, a second off the Flying Finn.

The Mercedes W11 proving to be a worthy successor to it’s 12 title winning predecessors.

Lewis added, “The car has been performing really well here, but it wasn’t the smoothest day for me, so there’s work to do tonight both on the driving side and set-up wise.

“But I’m sure it will grip up and things will be closer tomorrow,” predicted the World Champion who is seeking to equal Michael Schumacher’s record 91 Grand Prix victories on Sunday.