Bottas: There is definitely more to come 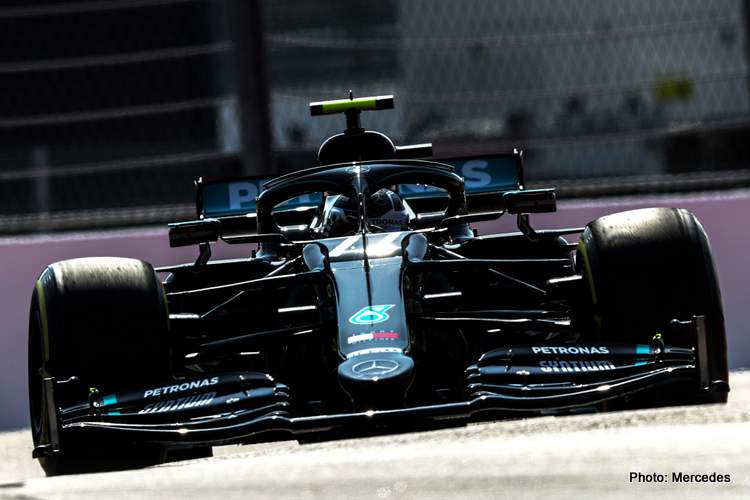 It could be said that Valtteri Bottas owns FP1, every race weekend Friday the Mercedes driver hits the ground running more often than his teammate Lewis Hamilton as the Finn did on day one of the 2020 Russian Grand Prix, declaring afterwards that he had more in the bag.

In FP1 he topped the timesheets while his teammate struggled with tyre issues and never attempted a hot-lap after he flat-spotted his tyres.

But in FP2, Hamilton recovered and also showed strong pace but Valtteri had the edge with his impressive 1:33.519 effort, a quarter of a second up on the #44 car – sending a warning signal to the world championship leader.

Valtteri reported at the day’s end, “There’s definitely more to come but overall, it was a positive first day of running. Conditions were quite tricky out there and that’s why there were so many drivers making mistakes.

“There were a few interruptions and that meant we were a bit limited with running, and I also had a big lock-up, which destroyed a set of tyres. Second practice was better, and we managed a lot of laps, but I still didn’t quite get all the sectors right.

“The first two sectors felt really good, but the car was a bit too nervous in sector three. I was doing some rally-style drifting at times, which probably isn’t the fastest way around, so there’s still a lot of time to find.”

“But we’re in good shape and I’m sure we can make improvements ahead of tomorrow,” added Bottas who needs to start beating his teammate on a regular basis between now and the end of the season to have a chance at the title.

But it remains to be seen if such scenario – Bottas beating Hamilton – fits into the Mercedes endgame which would be to ensure their superstar driver breaks the records that are now ready to be picked off.