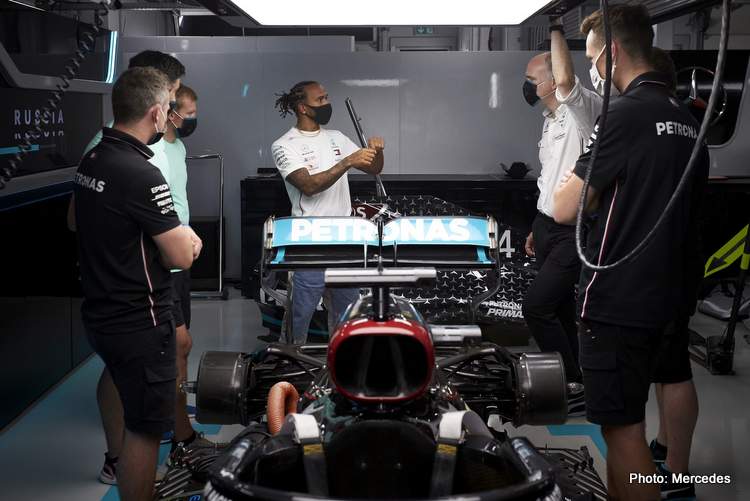 The Mercedes driver, who can equal retired Ferrari great Michael Schumacher’s all-time record 91 wins at this weekend’s Russian Grand Prix, wore the shirt before and after the race at the Mugello circuit in Italy this month.

“I haven´t spoken to them (the FIA) but I’ve heard that tomorrow they´ll come out with a new ruling of some sort saying what you can and cannot do,” he told reporters on Thursday ahead of the race in Sochi.

“I will just try to continue to work with them, whether or not I agree or disagree is kind of irrelevant. It’s just trying to find common ground of how we can do it together.”

The FIA said after Mugello there would be no investigation into Hamilton’s actions but indicated it was considering whether a protocol was needed.

Hamilton said he would not stop his campaigning for racial equality, “People do talk about sport not being a place for politics. Ultimately it’s human rights issues and in my opinion, that is something we should be pushing towards.

“I don’t know what they are going to do this weekend but lots of rules have been written for me over the years and that hasn’t stopped me.”

Taylor, a 26-year-old Black medical worker, was killed by police officers who burst into her apartment in Louisville, Kentucky, in March.

One officer has been indicted on charges of endangering Taylor’s neighbours but none are due to face charges of causing her death.

Hamilton posted a reaction on Instagram after Wednesday’s announcement, saying police were getting away with murder.

Asked if he would have a special message in Sochi on Sunday, Hamilton said he had nothing lined up “except to continue to do the symbolic gesture we do at the beginning of the race”.

Hamilton has taken a knee before every race this season, along with many of the other drivers, as part of an official anti-racism campaign, “We will continue to utilise the platform as we have been doing collectively.”