Button: Hamilton the cleanest guy I raced against 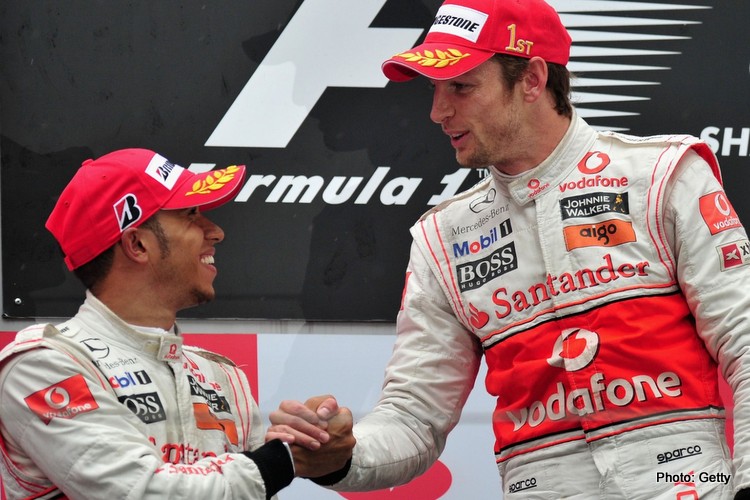 2009 Formula 1 driver’s champion Jenson Button has labelled Lewis Hamilton the ‘cleanest driver’ he ever raced against.

Teammates at McLaren from 2010-2012, Button and Hamilton formed a largely agreeable partnership in their time together, which is not exactly the norm for teammate interactions in F1.

“Whether or not you’re a fan of Lewis as a person, you should definitely be a fan of him as a driver,” Button told British GQ. “He is exceptionally talented, and he does not play games. He will never play dirty.

“In fact, I think he’s the cleanest guy I ever raced against.”

Not the only person in F1 circles to make such a statement about the six-time world champion recently, legendary commentator Murray Walker expressed an almost identical sentiment in August.

Having said that, Hamilton’s racing record has never been completely spotless, as his battles with Nico Rosberg and most recently, Alexander Albon, will attest.

In any case, it was something Button did not experience personally, as he reflects that Hamilton was “quite a shy character”  during their time together whose “whole life was about racing”.

“I had to work so hard to beat him, and obviously it didn’t happen all the time,” he said. “But it happened enough that I was happy with what I achieved.

“On balance he out-qualified me, but I could race him, and use my head because it wasn’t all about driving flat-out in a grand prix.

“But Lewis has learnt a lot since then. He’s always looking after the tyres, the fuel, the car… he knows what he’s doing.”

With Hamilton having shed some of that shyness to branch-out into fields other than motorsport, Button went on to praise him for his willingness to speak out on issues close to him.

“He’s in a position now where he can relax and think about other things in addition to driving the car.

“He can be very outspoken and I think it’s great that he is. It will help the sport and the diversity of the sport.”