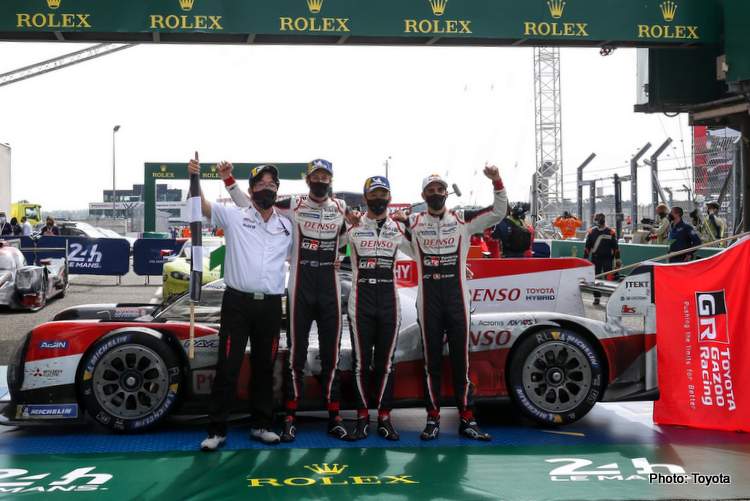 The #8 Toyota Gazoo Racing claimed a hat-trick of victories at the Le Mans 24 Hours, with Sébastien Buemi, Kazuki Nakajima and Brendon Hartley powering to a five-laps victory over their closest rivals.

It was a bittersweet result for the Japanese team, as the #7 car of Jose Maria Lopez, Kamui Kobayashi and Mike Conway which led for over half the distance, hit problems in the early hours of the morning. A 30-minute stop cost them a chance at victory and relegated them to third in the five-car LMP1 class.

All three winning drivers have had spells in Formula 1 with Buemi and Hartley driving for Toro Rosso and Nakajima with Williams.

Like Mercedes in Formula 1, the Toyotas are expected to deliver one-twos each time they race, such is their superiority as the only big factory team focussing on the top tier of WEC and Le Mans in this era.

Big kudos to Rebellion Racing who gave it a good shot but were never going to trouble the eventual winners on outright pace – Davids versus Goliaths springs to mind but, in this version, the little guys and their slingshots did not fell the giants.

The No.1 Rebellion R13 Gibson shared by Gustavo Menezes, Bruno Senna and Norman Nato came home in second place, five laps down on the winning Toyota which completed a total of 387 laps.

Rounding out the podium was the No. 7 Toyota TS050 HYBRID belonging to Jose-Maria Lopez, Mike Conway and Kamui Kobayashi, which started today’s race in pole position. The trio led for the first 12 hours before the car spent 30 minutes in the pits getting the turbo replaced, dropping the team behind the sister No. 8 car.

There was plenty of drama in the race’s closing hour when Deletraz hit the barriers at Indianapolis and had to come into the pits for a new front end. The incident also saw the team penalised by a 30 second time penalty. The Swiss team managed to repair the car and Deletraz successfully drove the car to the finish.

Elsewhere, Austrian squad ByKolles Racing retired in the race’s eighth hour. The No. 4 Enso CLM P1/01 was eight laps down due to an early alternator problem and encountered more problems when Bruno Spengler went off the track shortly after when the car lost its wing. 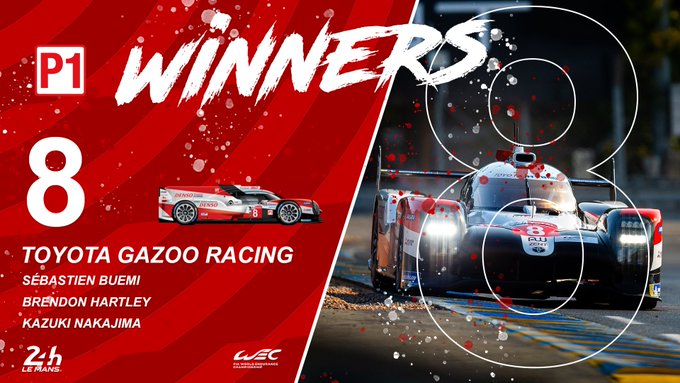 In contrast to the poor LMP1 turnout, LMP2 was packed with great teams and big-name drivers doing battle with the likes of Oreca, Alpine, Aura and Ligier.

It marks the first-ever WEC title for a British privateer team and saw the Anglo squad secure enough points to ensure it has won the prestigious title with one round still remaining.

United Autosports eventually finished the race 32.831s ahead of runners-up No. 38 JOTA who were hot on the tails of the No. 22 car but were knocked out of winning contention when Anthony Davidson was forced to bring the car back to the pits for a last-minute splash-and-dash.

Last year’s Le Mans winners and overall category victors Signatech Alpine Elf finished third out of the WEC entrants (and fourth overall behind the No. 31 Panis Racing entry).  Signatech’s trio of drivers André Negrão, Pierre Ragues and Thomas Laurent did a superb job of fighting back after the No. 36 car spent significant time in the pits early in the race with water pressure problems.

Fourth out of the full-time WEC entrants (and seventh overall) was the Cool Racing entry shared by Nicolas Lapierre, Antonin Borga and Alexandre Coigny.  The Swiss-based squad had a relatively trouble-free race with the only real issue for the No. 42 car being a left rear puncture.

Italian team Cetilar Racing finished fifth out of the WEC entrants – and 10th in class – with the trio putting in a strong performance throughout the 24 hours including a closely-fought battle with the all-female line-up in the No. 50 Richard Mille Racing Team entry who eventually finished one spot ahead.

Elsewhere, the No. 29 Racing Team Nederland had a difficult race eventually finishing sixth in the WEC LMP2 class (and 15th overall). Early in the race, the Dutch squad had difficulties with the car’s engine overheating.

An impact with an LMGTE Pro car also left to problems with the car’s balance and later in the race the car lost significant time in the pitlane with a fractured oil pipe.

The No. 33 High-Class Racing entry retired a few hours into the race due to ongoing problems with the car’s gearbox.
Throughout the entire race, the 24-field category provided plenty of action including disqualification for early class leaders, No. 37 Jackie Chan DC Racing.

The car was black-flagged after the marshals declared the team had received outside assistance when the ORECA stopped out on track with Gabriel Aubry at the wheel. 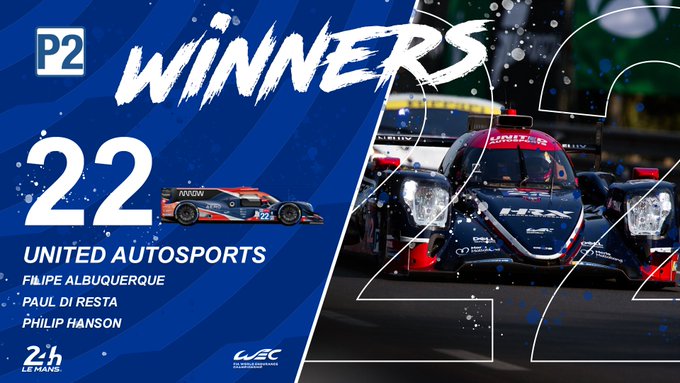 The British Union flags will be proudly flying high outside Aston Martin Racing’s factory as the team today recorded its best-ever 24 Hours of Le Mans results.

Victory in both the LMGTE Pro and GTE Am class could only have been improved upon if fans had been able to be present – sadly not possible this year due to the COVID health situation.

The LMGTE Pro category provided non-stop action between Ferrari and Aston Martin throughout the entire 24 hours, this year’s race being the first ever to be held behind closed doors which did nothing to dampen the action on the track.

At the chequered flag it was the No.97 Aston Martin Vantage AMR of Alex Lynn, Maxime Martin and Harry Tincknell which took the winners’ laurels.  It was the second win for Martin/Lynn together after Spa 2019 last season and the 10th victory in the WEC for the No.97.  Tincknell celebrated victory on his debut for the manufacturer.

Last year’s Le Mans GTE Pro winners, Alessandro Pier Guidi, James Calado and Daniel Serra in the No. 51 AF Corse Ferrari 488 GTE Evo finished runners-up – 1m33s behind after 24 hours of hard racing. The trio gave it everything they had and led many laps thanks to different pit strategies, but the balance tipped towards Aston Martin for the 2020 edition.

Third in class was the No. 95 sister Aston Martin Vantage of Nicki Thiim, Marco Sørensen and Richard Westbrook which finished 3 laps behind after some early delays. The points keep them at the head of the FIA GTE World Drivers Championship, a title chase which will be settled in Bahrain.

Until the final lap fourth place was looking to have been assured for the No.71 AF Corse Ferrari of Davide Rigon, Miguel Molina and Ferrari returnee, Sam Bird, but an agonising gearbox failure on the final lap meant they did not take the chequered flag and were not therefore classified.  The No.82 Ferrari of Risi Competizione took 4th place.

Porsche GT Team had a race to forget with both cars unable to match the pace of the Aston Martins and Ferraris, and both suffering from power steering issues which delayed them in the pits and dropped them well back in the running order. The No.91 finished 5th and No.92 6th. 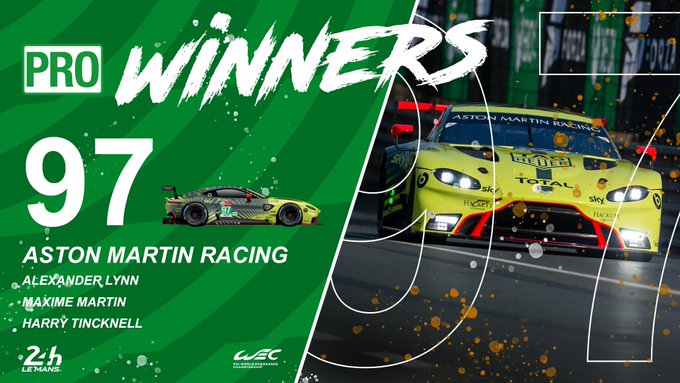 Aston Martin’s stellar day was crowned by the victory of customer team TF Sport in the Am category, the first podium for the marque in the category since 2014.

The No.90 Aston Martin Vantage AMR of Salih Yoluc, Charlie Eastwood and Jonny Adam finished 49s ahead of the No.77 Dempsey Proton Porsche after a flawless run throughout the race.

For a large part of the race, the TF Sport Aston Martin had had a close battle with the No.98 Aston Martin Racing car of Augusto Farfus, Ross Gunn and Paul Dalla Lana until that car encountered rear suspension trouble with eight hours to go.  Although out of contention, it recovered in the remaining hours to finish 8th in class.

The gap between the leaders and the rest of the GTE Am field was bigger until a safety car in the final hour – the fourth of the race – closed up the order.  When the race went green again the TF Sport secured its lead, but there was very close action behind for the remaining podium places.

Christian Ried, Riccardo Pera and Matt Campbell – who had fought back through the field through the night, took full advantage and hotshot Campbell took the No.77 Dempsey Proton Racing Porsche 911 RSR to second place.

Third in class, just 3 seconds back, was the No.83 AF Corse Ferrari 488 GTE EVO of Francois Perrodo, Emmanuel Collard and Nicklas Nielsen. Fourth went to the No.56 Team Project 1 Porsche, the German team having had a less than smooth 24 Hours of Le Mans. 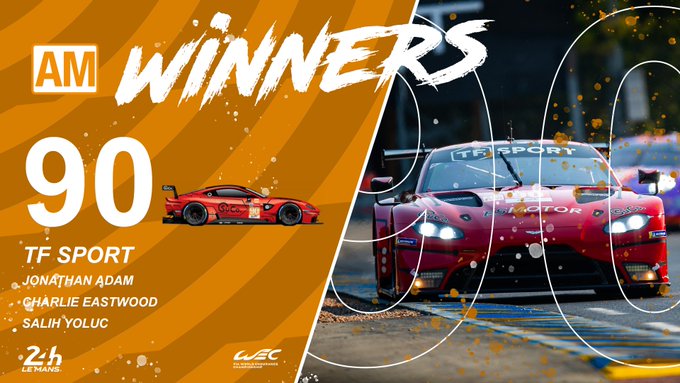 🏁 TOYOTA VICTORIOUS AT #LeMans24. That makes it three in a row for the Japanese manufacturer, congratulations to @Sebastien_buemi @kazuki_info and @BrendonHartley. 🏆🏆🏆#WEC @24hoursoflemans @ROLEX pic.twitter.com/rZ8B8Dglh3 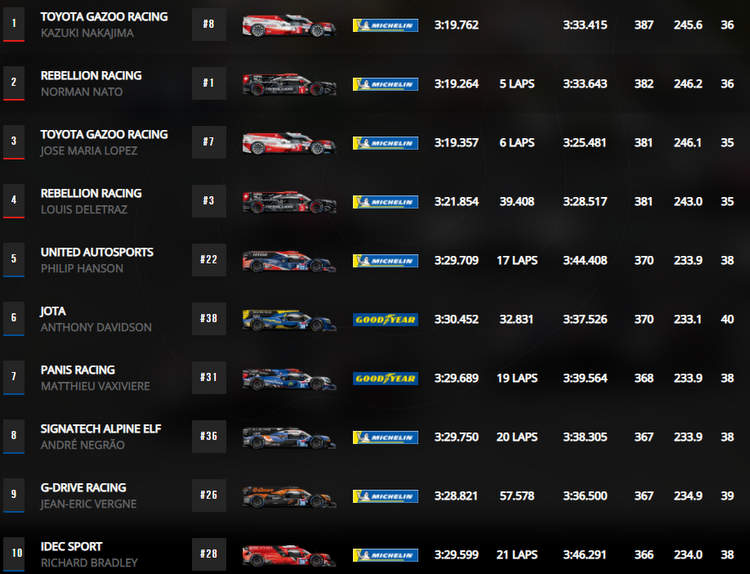 Our #7 car was brought into the garage for a turbo replacement. After just under 30 mins in the pits, the car has returned to the track in fourth position, 6 laps down on the leader.

A great team effort to get the car back on track. 👏 👏#ToyotaGAZOORacing #LeMans24 pic.twitter.com/7xWFuepi08

As the 24 Hours of Le Mans passes the half-way mark and the drivers are now competing in full darkness, below are the main headlines following the first 12 hours of racing.

So far, there have been three safety car periods and eight retirements (out of a total 59 entries). Despite rain being forecast, the track has so far remained dry.

he 2020 edition of the 24 Hours of Le Mans had settled into a steady rhythm until the first Safety Car of the race was brought out at 20h14, closing up the field and offering opportunities for revised strategies. Changes could still be ahead as night falls and the potential for rain showers remains.