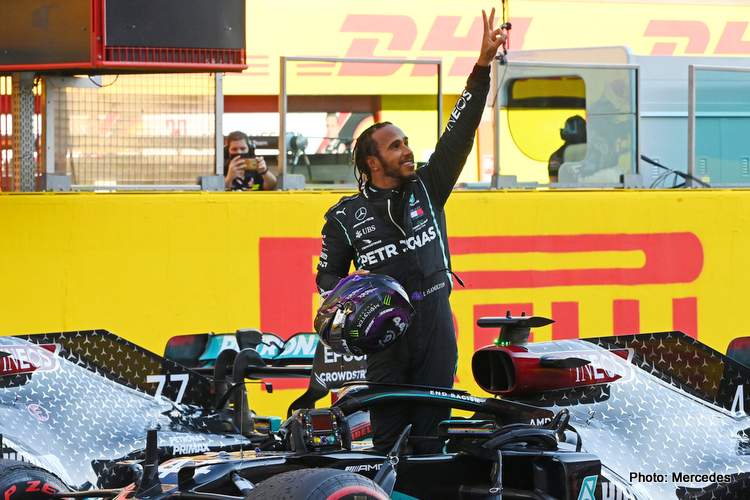 Lewis Hamilton first ousted Michael Schumacher from Mercedes, and now the Briton is on the verge of beating the great German’s incredible record of 91 Grand Prix victories.

A stat that is surreal for the man who is one victory away from matching what was once perceived to be an unbreakable Formula 1 record. The significance does not escape Lewis who, this season, is also set to match Schumi’s record seven F1 titles.

“It just doesn’t seem real,” admitted the 35-year-old. “Obviously it’s ultimately a privilege to be in a position and have such a great team and a car to be able to deliver weekend in, weekend out but I just feel forever grateful to the people that continue to work hard”

Lewis also tipped his hat to the people who put the #44 on track and his teammate, “I’m just a link in the chain but getting the wins is not easy when you have a great driver in Valtteri pushing you to the limit, weekend in, weekend out.”

“But I never thought that I would be here, that’s for sure,” he added during the post-race press conference.

If Lewis wins in Sochi, next Sunday, he will tie Schumi’s record and is sure to go one better before the season ends; he has eight rounds to do it in…

Does his team have a celebration planned for the occasion?

“No, because we very much believe in karma,” explained Mercedes team boss Toto Wolff. “You need to be able to let things happen.

“Who would have ever imagined that somebody was going to break that record of 91 wins? If that were the case I’m sure we will come up with some creative ideas.”

Notably, Michael scored his 91st victory at the 2006 Chinese Grand Prix, it was his 246th Grand Prix start; at Mugello on Sunday, Hamilton scored his 90th F1 win from 259 starts.