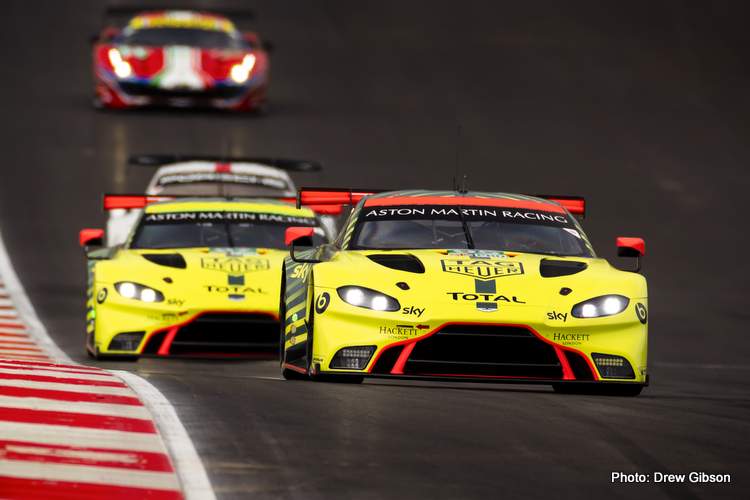 Aston Martin Racing heads into the 88th running of the legendary 24 Hours of Le Mans aiming to take its third class victory with Vantage, and secure the 2019/2020 World Endurance Championship.

For the first time at the Circuit de la Sarthe, both classes will race with the current turbocharged 4-litre V8 Vantage GTE, with three works team entries and one customer car firmly setting sights on its maiden Le Mans win.

This year, for only the third time in its history, the 24 Hours of Le Mans has been moved from its traditional mid-June slot to a late-September date and sadly, for the first time, the famous event will be run behind closed doors as France moves to contain the spread of the COVID-19 pandemic.

But while there will be no fans in the tribunes opposite the world’s busiest pitlane, Aston Martin Racing is determined to put on a good show for the millions watching on television around the world by repeating its 2017 triumph for Darren Turner, Jonny Adam and Daniel Serra.

Only Thiim has stood on the top step of the podium at Le Mans before, when Aston Martin last won the GTE-Am class in 2014, but victory for him and Sørensen is all the more important in 2020 because it could also net them the world championship title depending on the fate of their closest rivals.

“I hope that we can win it this year, it feels like our time to fight for it,” said Thiim. “Just to be so competitive is a great feeling after the frustrations we’ve encountered at Le Mans in recent years. We also need to keep the right mentality towards the world championship. There are a lot of points at stake and for us, the main objective is to stay ahead of Porsche, so we want to finish ahead of them in the race.”

Sørensen added: “This year’s Le Mans is going to be one of the most important races in my career. We are going to race hard and try and win it but we are also going to be thinking a lot about the championship. We have to keep our heads down and focus.”

Their team-mates Alex Lynn (GB) and Maxime Martin (BEL), who will be joined in the #97 Vantage GTE by British racer Harry Tincknell, are among those who can challenge the Danes for the title, but to do so they must record a strong finish at Le Mans ahead of the #95 car.

All three Aston Martin crews, including the #98 GTE Am team of Paul Dalla Lana (CDN), Ross Gunn (GB) and Augusto Farfus (BR) will benefit from significant testing preparations in recent weeks, as the team honed the Vantage GTE for the specific requirements of the fast Le Mans circuit.

The car will go in to the 2020 edition at La Sarthe with different Michelin tyre options as well as optimized suspension, brake and aero set ups since the cars last raced there more than 14 months ago.

As one of the favourites in the GTE Am battle, the #98 crew will face strong competition from Aston Martin Racing partner team TF Sport whose drivers Salih Yoluc (TUR), works driver Charlie Eastwood (GB) and 2017 winner Adam (GB) have won three races so far this season and are just 12 points away from the championship lead.

“We set out at the beginning of the season to regain the world championship we won in 2017, and that remains our target, but it would be the fulfillment of a dream to win Le Mans!”, said Dalla Lana, who has never triumphed at Le Mans but has come very close on several occasions.

Aston Martin Racing Head of Performance, Gustavo Beteli said: “This is one of the strongest driver line-ups that we have ever taken to Le Mans across the three entries, and we have worked incredibly hard to prepare the cars for this year’s race.

“Nothing has been left on the table, but Le Mans is one of the most challenging races and there are plenty of things that can happen that are out of your control.

“This year’s race will be different because of the time of year, and 12 hours of it will be run in the dark. Success will be all about focus, a good strategy and hitting the ground running.”

Aston Martin Racing Team Principal Paul Howarth added: “Le Mans is always about preparation and focus if you want to be competitive, and this year it is even more critical with the necessary distractions surrounding measures to protect everyone from the coronavirus as well as the significant changes to the schedule.

“Moreover, with double the points on offer than you receive for a regular six-hour race, a good result can confirm a title while a poor result might render us out of contention. It is absolutely critical we absorb these pressures and use it to motivate us further, so that we take advantage of all opportunities.”

Aston Martin Vice President Chief Special Operations Officer and President Aston Martin Racing David King said: “It’s been a while since we have been in this position, where we go to Le Mans in a position to fight for class victory and also be at the sharp end of a fierce fight for world championship titles.

“It’s why we enter WEC and it’s why we compete at Le Mans and we relish the prospect of being able to compete for both. I firmly believe that with a fair wind, and a strong performance, the car and the team has the capability to deliver a fifth class win for Aston Martin in the modern era and the first world championship title since 2017.”

Marco Sørensen (DEN), #95 Aston Martin Vantage GTE: “This year’s Le Mans is definitely going to be one of the most important for both myself and Nicki’s career. Yes of course it is important to win the race, but we are also fighting for the world championship. We are going to race hard and try and win it but we are also going to be thinking a lot about the championship. We have to keep our heads down and focus. We are all ready for the big show, the car is fast, the team is pumped, we just need to get on with it now.”

Nicki Thiim (DEN), #95 Aston Martin Vantage GTE: “It’s sad that there won’t be any spectators this year as they are the most important part of the race, but as soon as the helmet goes on it’s about getting the job done and I’m just happy that at least we can go out racing now. I hope that we can win it this year, it feels like our time to be able to fight for it. Just to be competitive is a great feeling after the frustration in recent years. We also need to keep the right mentality towards the world championship. There are a lot of points at stake and for us, the main objective is to stay ahead of Porsche in the points.”

Richard Westbrook (GB), #95 Aston Martin Vantage GTE: “This is the biggest race of every endurance driver’s year and to be contesting it with Aston Martin Racing is a great honour. So much preparation goes into getting ready for this one event. Le Mans is different to the other races in WEC, not just in length but with the high grip level of the track and the high speed nature of it as well. Every driver loves coming here. I think we will all miss the fans, they make this race what it is and they are so important. We will do what we can to put on a good show.”

Alex Lynn (GB), #97 Aston Martin Vantage GTE: “It felt good to be on the podium again at Spa-Francorchamps and, once again we showed the pace that we have in the crew and the car. Now we have another chance to prove it in the biggest race of them all. It won’t be the same without the fans there, but this is still Le Mans, and it’s an event every driver wants to win. I have the best driving crew I could hope for with Maxime and Harry joining us for this race. I believe we have everything we need to fight for the win, and if we do, that will bring us right back into the world championship hunt.”

Maxime Martin (BEL), #97 Aston Martin Vantage GTE: “Le Mans is the big event of the year. It’s going to be tough. The championship is very close – we have been fighting for the top step of the podium nearly every race this season and it is going to be a challenge. I’m very sad that there is no public this year which especially, for an event like this, is going to be a bit strange. But I think it is better to race without the public than not race at all so I’m very much looking forward to it. I hope that the work that we have done in the background means the package will be great from the start. It’s going to be a long race, but we have a good chance.”

Harry Tincknell (GB), #97 Aston Martin Vantage GTE: “It’s an honour to be a British racing driver competing for Aston Martin Racing at Le Mans. If you look at the names associated with Aston Martin, it’s a list that features some of the greatest drivers that have raced at Le Mans. I feel fortunate to have joined the team at a time when the car is at a peak level of competitiveness. The team has prepared for the event really well and I’ve bonded quickly with Max and Alex, and, having spent time testing it in recent weeks I’m very confident that the Vantage is able to fight at the front in the most important race of the year.”

Paul Dalla Lana, #98 Aston Martin V8 Vantage GTE: “We set out to regain the world championship we won in 2017 at the beginning of this long and unique season, and that remains our goal. But winning Le Mans is a special dream, and we have come so close in the past. We have the car and the team to do it, and along with Ross and Augusto we will give it our best shot.”