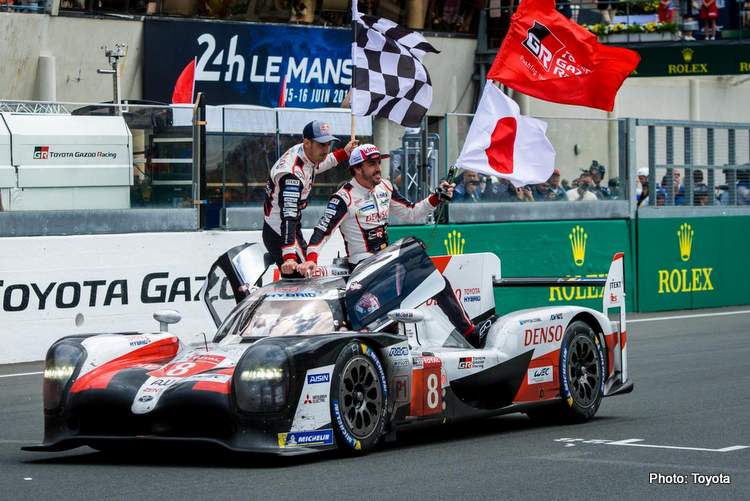 Ahead of the 88th edition of the Le Mans 24 Hours, Sebastien Buemi was asked to reminisce on the great races he has been involved in at Circuit de la Sarthe since 2012 without interruption and cites his first victory with Fernando Alonso and Kazuki Nakajima as the sweetest.

Indeed it was a famous victory for the Toyota Gazoo Racing outfit as it helped Alonso on his Triple Crown of Motorsport journey while giving Sebastien his first win at the fabled venue. The trio also won last year but this time out Alonso has been replaced by former F1 driver Brendon Hartley.

Here is a Q&A with Buemi ahead of the first day of practice at Circuit de la Sarthe:

Hi Sébastien, what is your first memory of Le Mans?
“I think it’s when the Toyotas were leading back in 1998 or 1999. I remember the car getting a puncture towards the end of the race and I was around 10-years-old. Then at the Geneva Motor Show the car that raced Le Mans was there and I remember taking a picture of it on the Toyota stand. It’s pretty strange to think that more than 20 years later, I won Le Mans in basically the granddaughter of this car.”

And what is your favourite memory of competing there?
“Winning Le Mans has to be my favourite memory. The worst one was 2016 was when we retired during the last lap while leading and the best is 2018 when we won for the first time with Fernando [Alonso] and Kazuki [Nakajima].”

What’s your favourite section of the circuit and why?
“It’s pretty clear for me and I think most drivers will say the same: the Porsche Curves at the end of the track. It gives you special adrenaline and it’s pretty tough there to drive on the limit. It’s narrow and very high speed so as a driver, you really experiment with the speed – I really, really like that section.”

What is key to the perfect lap at Le Mans?
“Mainly the traffic! For us, in LMP1, we have to overtake a lot of cars. So, in order to get a clean lap without losing time in the corners that’s really important. It’s also about the rhythm and making sure you know the limits of the track. Finally, you need to be aware that the track is evolving a lot – the grip is forever changing.”

If you could go back in time and choose to compete in Le Mans on any year, what would it be and why?
“This question is difficult. Of course, I would have loved to race in the 60s when they had Ford against Ferrari. Especially having seen the film, Le Mans ’66. I also would have loved to race in 1960 when my grandfather [Georges Gachnang] raced at Le Mans. It is difficult to compare the different years. I enjoyed competing against Porsche, Audi and when Nissan was involved. I have been very lucky to race at Le Mans during some amazing years.”

If you could chose any two team-mates (dead or alive), to compete at Le Mans who would they be?
“I think I’ve been very lucky to drive with Fernando and Kazuki and I wouldn’t change that to be honest. Other than that, maybe Tom Kristensen and Jacky Ickx – there would be a lot to learn from those two with their wins combined and also considering what they have achieved over the years.”