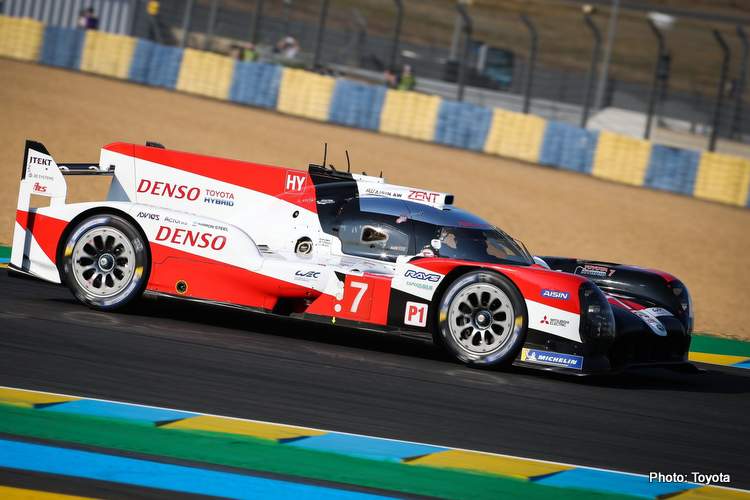 Toyota Gazoo Racing dominated day one of track action at Le Mans on Thursday, their car two cars easily the quickest of the five LMP1 cars, but the real race is behind them in the LMP2 Class and the GTE Pro and Pro-Am classes where it is extremely close.

The #7 Toyota of Mike Conway, Kamui Kobayashi and José María López was quickest in the frenetic 45-minutes session, with the #8 car of Sébastien Buemi, Brendon Hartle and Kazuki Nakajima.

Eary on in the session ex-F1 driver Kamui Kobayashi got the bit between his teeth and unleashed an impressive Kobayashi 3:17.089, a quarter of a second quicker than Nakajima in the sister car.

Aston Martin did the double, topping the timesheets in both the GTE-Pro an in GTE-Am.

The top six from each class will partake in the Hyperpole – a new concept – on the morning of race day on Saturday, to decide the final grid standings for the 88th running of the legendary race at Circuit de la Sarthe.

These are the main headlines from the 45-minute session held in warm and sunny conditions. Full results from qualifying can be found HERE.

FP3 will run at 20h00 CEST tonight before a final practice session at 10h00 tomorrow morning. Hyperpole to determine the final grid will get underway at 11:30 (CET) local time.

Earlier in the day, these were the main points after Free Practice 2:

Below are the main headlines from FP2 out of the 28 WEC entries competing at Le Mans, which also forms round 7 of FIA WEC Season 8.

Le Mans qualifying sessions are getting underway at [17h15] before the final practice session of the day which will commence at 20h00.