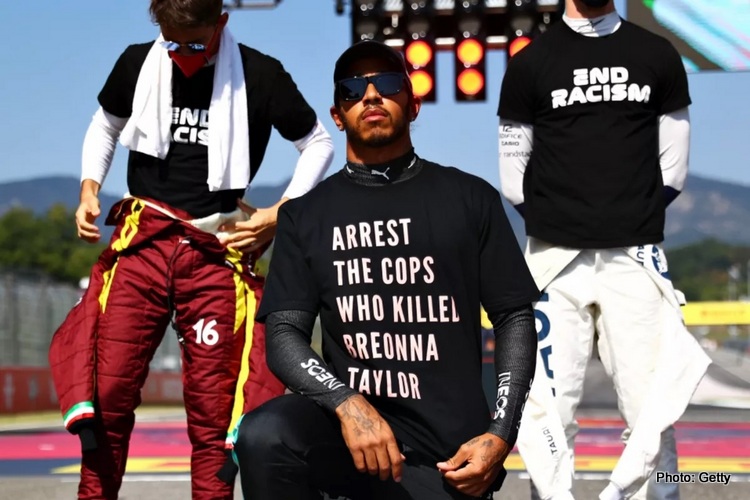 Formula 1’s governing body is considering whether Lewis Hamilton broke any rules in wearing a T-shirt with “Arrest the cops who killed Breonna Taylor” on it before and after Sunday’s Tuscan Grand Prix.

“We are giving this issue active consideration,” said a spokesman for the governing International Automobile Federation (FIA).

He added that the discussion was also about how to proceed in future.

Taylor, a 26-year-old Black woman, was killed by police officers who burst into her apartment in Louisville, Kentucky, in March.

One police officer involved was fired by the city’s police department in June. Two other officers have been placed on administrative reassignment. No criminal charges have been filed against any of the three.

Hamilton has regularly worn a ‘Black Lives Matter’ T-shirt when taking a knee in an officially-sanctioned anti-racism protest before the start of races this season.

Sunday’s shirt was a departure from that, with a photograph of Taylor on the back and ‘Say her name’. Japanese tennis player Naomi Osaka recently wore a face mask with Taylor’s name at the U.S. Open.

Hamilton said on Sunday Osaka had been “an incredible inspiration”.

Race stewards did not open any investigation into Hamilton’s actions at Italy’s Mugello circuit.

It was not immediately obvious in any case what statute Hamilton might have broken.

The FIA, which maintains a non-political stance, is working with the Briton, F1’s only Black driver, on a diversity commission and has promoted an anti-racism campaign.

The sporting code bars teams from using “political or religious” advertising but does not mention the drivers.

Mercedes team boss Toto Wolff also made clear he had no problem with whatever Hamilton chose to wear.

“It is entirely his decision. Whatever he does, we will support,” the Austrian told reporters last Saturday.

“The team is fighting against any kind of racism and discrimination and it is Lewis’s personal fight for Black Lives Matter and with all the support we can give him.

“The much broader movement is obviously the fight against any kind of racism and discrimination — and we as a team and as a corporate have always put an emphasis to fight against that injustice.”