Albon: Thanks for sticking with me 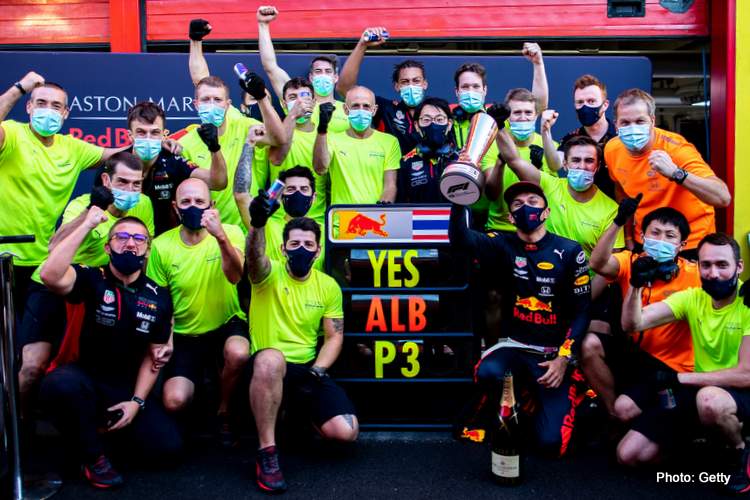 Alex Albon was in desperate need of a big result, on Sunday at a frenetic Tuscan Grand Prix the Red Bull driver emerged from the mayhem at Mugello to score his first podium in the top flight and with it earn some well-deserved breathing space.

With Pierre Gasly winning the Italian Grand Prix for AlphaTauri, calls gathered momentum for the Frenchman to be given another shot at Red Bull as Alex’s form nosedived and results were not happening.

Furthermore, talk of out-of-a-job Sergio Perez being recruited by the Bulls to partner Max was doing the rounds, as they traditionally do when a driver runs out of options. Remember Nico Hulkenberg? Even Sebastian Vettel was heading there after his Ferrari punt.

But on Sunday the Thai driver survived the attrition and with it repaid his paymasters with the type of result they expect, as they stick to their guns of nurturing talented drivers through the programme headed by Helmut Marko.

This result went a long way to justifying their philosophy which, after all, produced the likes of, not only Seb but also, Daniel Ricciardo and of course Max.

As the race unfolded at Mugello, Alex was able to attack with a handy piece of kit at his disposal. His overtakes were of the highest order and his reward third-place – a podium visit for the first time in his 30 starts in the top flight.

On the slow-down lap, the audibly relieved driver said over the team radio: “Thanks for sticking with me.”

Indeed the Red Bull camp has broken with tradition, exercising extreme patience with a driver who was thrust in the deep-end last year, impressed with his early adaptation to the unenviable role of being Max Verstappen’s teammate. The benchmark is very high.

However, this year it is 9-0 in qualifying in favour of Max, the gap anything from four-tenths of a second to double that. While Alex has struggled to maintain that upward-line on his performance graph, which may have even taken a dip, until now.

Afterwards, in the TV pen, Albon – clearly content but typically serene – told reporters, “Obviously a while to get here… and it was a tough one. I had to work for it. I can breathe, it feels nice to be here.

“We just didn’t get off the line so most of the overtakes had to be done on the circuit. Our car is good on the brakes, we’ve known that since day one, so we can do the kind of moves like that. It’s fun to drive.”

Later he added in the team report, “It’s something I’ve always wanted and one way or another we haven’t been able to get it so to be there today is pretty special. It’s really nice to give the Team something back after they’ve supported me since day one and show them what I can do.

“It was a tough race and definitely not one of the easy ones. This track is brutal, especially the high-speed corners in sector two, and with so many re-starts to manage we had our work cut out.

“We struggled to get off the line so I knew I had to be aggressive to get all the overtakes done but we had a really good car and we know it’s good on the brakes so we used that to our advantage.

“When we lost two positions on the final restart, I was fired up as I wasn’t going to let the opportunity of a podium go by so I pushed hard to get third and I’m over the moon with today’s result,” concluded Alex who became the 213th driver to celebrate on a Grand Prix podium.

Team boss Christian Horner was chuffed for his charge, “I am really pleased for him. He has bounded back the last couple weekends. He has been getting stronger and stronger. He had to really fight for it. The starts were pretty horrible.

“He is Mr Round the Outside! His placement of the car is really very good. Daniel is a hard guy to pass.

“It is a disadvantage that he is too nice. When he puts the helmet on there is a real racer. It is different thinking you can do it to knowing it. This podium for him will give him a boost of confidence. I think he will build from here nicely,” added the Red Bull team boss.