Verstappen: We shouldn’t have been in that position in the first place 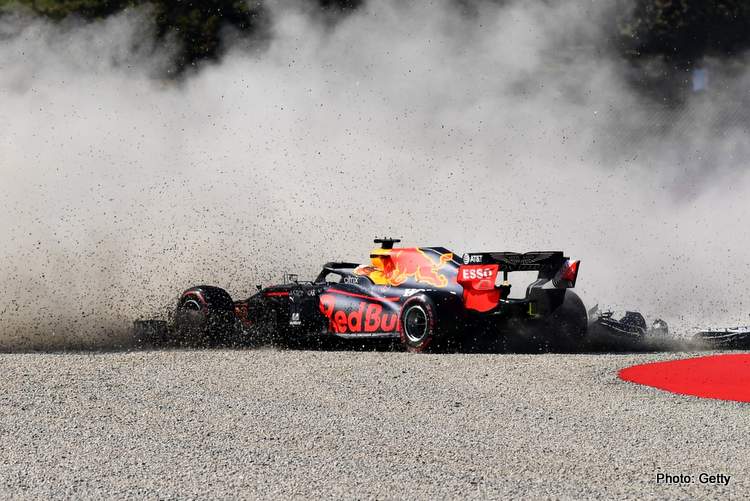 For a few seconds, as the field roared off the grid at the start of the Tuscan Grand Prix, Max Verstappen’s Red Bull edged into second place briefly, but then his Red Bull lost power and was engulfed by the frenetic midfield-pack.

The rot may have started even before the race as mechanics worked feverishly on the #33 Red Bull on the grid. Suggesting an issue with the car already then.

By the time the Honda turned itself on again, the blue car was way out of position and apparently not fully on-song. Then,  Max was tagged in the chaos heading to Luco (Turn 2) which ended with him getting a rear-end punt into the kitty-litter, where he remained for a second successive DNF and a third so far this season.

After the race he reported, “I am of course very disappointed as I know this could have been a really good race for us. I had a good launch at the start of the race and went around Lewis but then the car just didn’t accelerate so I lost a lot of speed and had no power.

“I then dropped back into the midfield and got hit from behind. When you drop into the middle of the pack in the first few corners like that it’s quite easy to get involved in a crash so I’m not disappointed about that, we shouldn’t have been in that position in the first place.

“There isn’t much more to say but it is just really disappointing for the Team that we had to retire again, especially when we looked so competitive but it is.

“Of course, good to see Alex maximize the result and get on the podium,” added the Dutchman who remains third in the drivers’ standings, albeit 80 points adrift of championship leader Lewis Hamilton and 25 off of second-placed Valtteri Bottas.