The Morning After: Luck, timing or both? 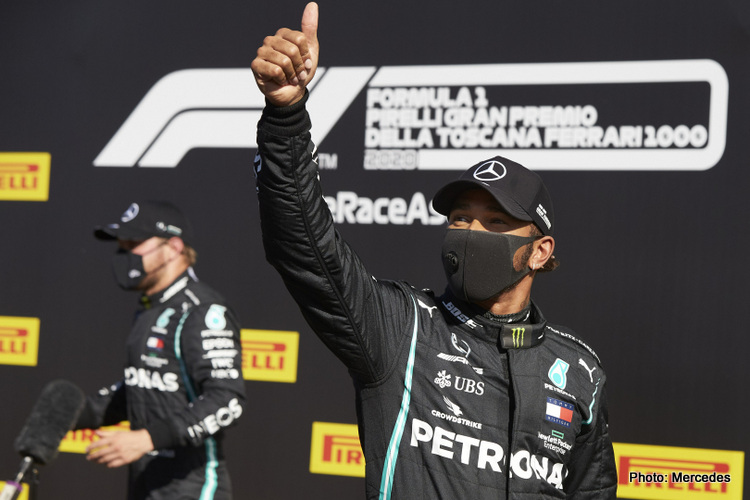 Lewis Hamilton might not have been the fastest Mercedes driver for most of the weekend so far, but once again, he was when it mattered.

You’ve got to feel for Valtteri Bottas.

Fastest all weekend up to that point, the Finn looked good for his first pole position since the 70th Anniversary Grand Prix at Silverstone, but then, as has happened so many times before, a combination of fate and Lewis Hamilton stepped in to crush him.

Still coming to grips with Mugello through the end of FP3, Hamilton finally topped a session for the first time in Q2, and then held his advantage in the first Q3 runs before Esteban Ocon’s spin ensured Bottas wouldn’t get a chance to once more turn the tables.

And while it’s certainly reasonable to say Bottas was unlucky – Hamilton failed to improve on his uninterrupted second run, and the Finn was only 0.059s off with more pace in hand – it was also a very fair indicator of what separates the very good from the inexorably great. As much as qualifying is about seizing the moment, you don’t know when that moment will come, and on Saturday it just happened to come early – much to Bottas’ chagrin.

Not exactly the follow-up Pierre Gasly would’ve wanted to last week’s performance in Monza. Apparently a mistake with his setup meant he was without battery power for the final 300 metres of his lap, but I’d say that’s no excuse compared what to what Daniil Kvyat had to deal with.

Is it more encouraging that Alex Albon was right behind his teammate Max Verstappen in P4, or more concerning that he was still nearly half a second off?

A hell of an effort from Sergio Perez to beat Lance Stroll, considering the latter had an updated car. You think he might have a little extra motivation this weekend?

With Mugello being a brand new circuit where it’s not so easy to overtake, with high speeds and close gaps as well, strategy is going to be all-important: especially as tyre wear and degradation is expected to be quite high. That degradation, on the Red soft tyre in particular, will be key to the strategy.

Both a one and a two-stop strategy are possible, but as always, the teams will try to complete the race with just one stop: especially those in the top 10 of the grid (all starting on the soft compound).

Based on the tyres that the drivers have available, the one-stopper is slightly slower but very marginal on wear: starting on the soft tyre and then switching to the White hard on lap 22. This is the strategy that the top 10 on the grid seem likely to go for.

The slowest – but more flexible – one-stopper will be a medium-hard strategy, switching tyres on lap 26. As always, these strategies can all use the tyres in a different order, depending on individual race circumstances.