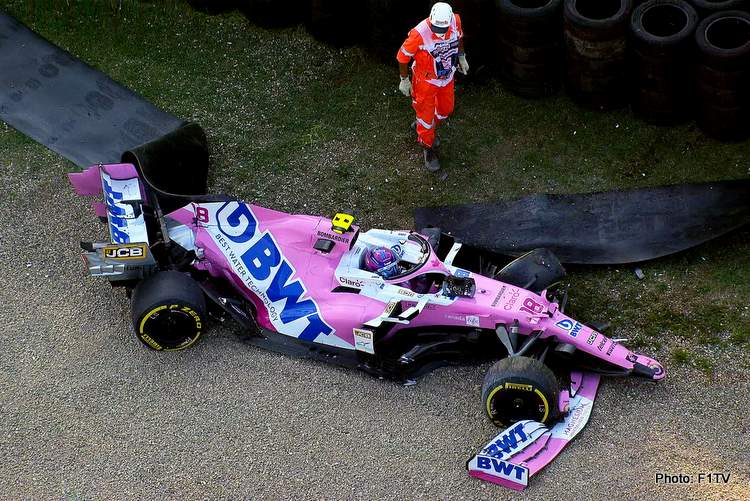 Lance Stroll was looking good for a podium after the last restart during an action and incident-packed Tuscan Grand Prix, but the Racing Point driver suffered a puncture which resulted in a big crash for the Canadian.

Earlier, at the start of the race, the pink car avoided the mayhem behind him as the field roared through Luco (Turn 2) at Mugello and remained at the sharp end all afternoon, running as high as third when a left rear puncture and put paid to his afternoon.

Lance reported after the race, “First of all, I’m OK after what was a big impact. We’re still investigating the cause of the crash. It all happened so quickly, but it felt like a puncture.

“We need to go away and look at the data and fully confirm the reasons for it. There were some really strong points on the table and we were closing on Ricciardo for the final podium place before the accident, and it was all set up for an exciting finale.

“I’m pleased with how the upgraded package performed this weekend, and it gives us a good platform for the coming races. We were able to make a good start to the race and get a good launch in the restart to keep out of trouble until late on.

“It was an unfortunate result and sometimes that’s how the cookie crumbles, but I’ll take the positives!” added the Racing Point driver.

Team boss Otmar Szafnauer confirmed, “A challenging day for the team on many fronts with two race stoppages, including a big accident for Lance caused by what looks like a puncture.

“It was very bad luck because Lance was fighting for the podium all afternoon. He was running in fourth place and the failure happened just as we asked him to push up and overtake Ricciardo for third.

“Fortunately, he is ok after a significant impact with the tyre barrier at turn nine,” added Szafnauer.

Sergio Perez saved some pride for the team with fifth place and showed concern for his teammate, “I’m also relieved to hear that Lance is OK after his big crash.

As for his own afternoon, he said in the team report, “The key to our race was keeping our focus and staying calm in all the incidents and red flags, which we managed to do.

“I think the podium was a possibility for us today, but we just didn’t quite have the pace or the balance to make it into the fight for the podium,” added the Mexican.

Such a shame what happened today. We were in a really good position, fighting for the podium! I’m grateful I walked away with no injuries and I want to thank @F1 and the @fia for all the safety standards they have implemented over the past years. We will be back stronger 💪 pic.twitter.com/kX0Pr3QIt7