Gasly: I saw some space between Kimi and Romain 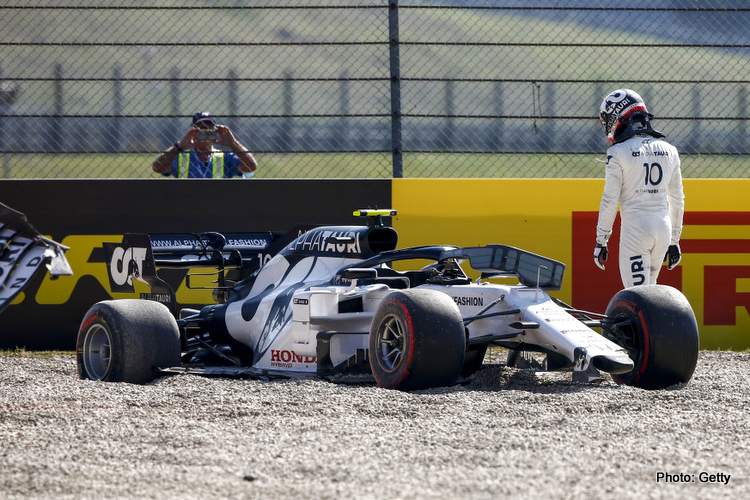 In 1996, Olivier Panis won the Monaco Grand Prix, however, at the very next race in Spain that year the Frenchman crashed out on the opening lap of the race.

Fast-forward 24-years and the first Frenchman to win a race since then – Pierre Gasly – fresh from winning the Italian Grand Prix last time out, binned his AlphaTauri on the opening laps of the race.

Now, how is that for history repeating itself?

Inevitably hero-to-zero pops into mind, but what resulted from the chaos on the opening lap, as they barreled up the hill to Luco, was a racing incident pure and simple: three into one does not go.

The AlphaTauri was squeezed, got airborne and slithered into the gravel trap, coming to a halt not far away from fellow-victim Max Verstappen, in his similarly stricken Red Bull.

Thus, an early shower for the pair, after which Gasly reported, “It’s a shame to finish the race just after the first corner. It was quite messy coming into Turn 1 with so many cars side by side.

“I saw some space between Kimi and Romain in Turn 2, I ended up in the middle and had nowhere to go, so we collided and that was pretty much it.

“I don’t think there is anyone to blame, but it’s a shame as I feel like we missed an opportunity for points today. We showed good pace all weekend and, even if we didn’t have a great qualifying, I was confident we could recover today.

“Obviously, I would have liked to have been out there with the guys and fight for points, but I think we need to take the positives here because the performance so far has been good, so we need to carry this to Sochi,” added Gasly.