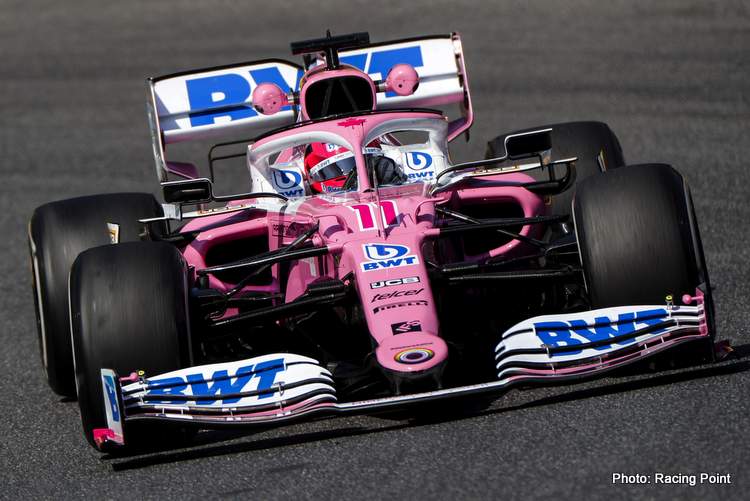 For this weekend, Lance Stroll got the latest Racing Point updates said to be worth a quarter-second per lap, Sergio Perez did not get the privilege to sample the go-faster goodies, yet the veteran outqualified his younger teammate but will cede him a sixth spot on the grid for tomorrow’s Tuscan Grand Prix.

Perez was penalised a grid place drop for an incident involving Kimi Raikkonen during Friday practice, and it turns out his teammate Stroll is the one that benefitted when the dust had settled on qualy!

The Mexican, who will depart the team at the end of the year, said afterwards, “It’s a shame that we have the penalty for the Grand Prix, but if I had to lose a place on the grid – I’m glad it’s to my team-mate!

“Lance was able to run the car upgrade today, which is looking positive, so that’s a good sign for the coming races. It’s a new race for all of us, so there’s plenty of unknowns and calling the strategy won’t be easy tomorrow. A strong start will mean we have everything to play for in the race.”

Stroll with the new bits bolted to the pink RP20, should’ve been a tenth or two faster than Perez but his final run was aborted due to the yellow flag in sector one, triggered by Esteban Ocon’s spinning Renault.

“I think we could have qualified in P4 or P5 without the yellow flag on the final runs in Q3. I’d set a comfortable banker lap on my first run and I think I was set to improve significantly on my second.

“Regardless, there’s plenty of positives to take from today. We improved the car overnight and earned a good starting position – and that’s important because overtaking is going to be difficult here.

“I’m happy with the feel of the car and we have good underlying pace, so I think we have the potential for a strong result tomorrow,” ventured the Canadian.

Team boss Otmar Szafnauer confirmed, “Lance was unlucky on his final run in Q3 to be disadvantaged by the yellow flags for Ocon and had to abort the lap. That took away his chance of getting ahead of Leclerc.”