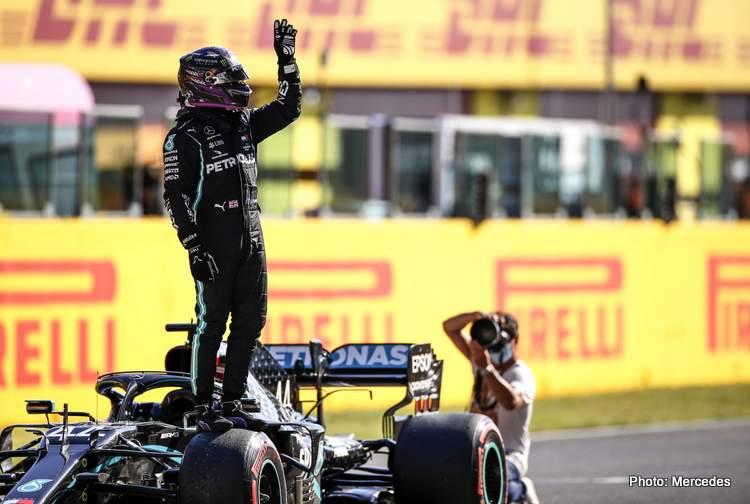 Lewis Hamilton is on pole for the 95th time in his career, after a late yellow flag scuppered any chance of Mercedes teammate Valtteri Bottas beating him at Mugello on Saturday.

Leading the way with a time of 1:15.144, Hamilton managed to turn the tables on Bottas, who had led all three practice sessions of the weekend, although the Finn has the right to feel aggrieved after a spin from Renault’s Esteban Ocon late in Q3 stopped him from improving his time.

As a result Hamilton, whose first effort in Q3 was the best of his two runs, took pole by 0.059 seconds.

“It’s been a really tough weekend if I’m being honest,” Hamilton said afterwards. “This track is phenomenal. It’s a really really challenging circuit, and Valtteri was quicker than me all through yesterday, this morning, and even in Q1.

“I’ve been working so hard in the background to try and improve. The team did such a great job and I finally got the lap that I needed. I couldn’t go quicker at the end, but it was job done.

“Valtteri did a great job pushing me, but I’m really really happy.”

Asked whether he had the goods to push Hamilton off of pole had Ocon not brought the flags out, Bottas said “definitely”.

“I still had more time in there,” he said. “Run one was OK, but not perfect. I was looking forward to the last lap but I didn’t get the opportunity.

“It’s disappointing because the speed has been good all weekend.”

A further 0.306s back in third, Red Bull’s Max Verstappen indicated he was just surprised to be so close.

“I personally never expected to fight them,” he said. “I think overall this weekend has been really promising, we have bounced back well from Monza. To be third in qualifying, we can be very happy with that.”

Proving the top three remain a class of their own, there was almost half a second to Verstappen’s teammate Alexander Albon in P4, the Thai himself three tenths ahead of Ferrari’s Charles Leclerc in 5th.

Sergio Perez was P6 ahead of teammate Lance Stroll, a result that has to feel extra sweet for the Mexican given he not just received his marching orders this week from Racing Point, but was lacking several updates applied to his teammate’s car.

Daniel Ricciardo was P8 ahead of McLaren’s Carlos Sainz, the Spaniard acting as the meat in a Renault sandwich with Esteban Ocon rounding-out the top ten.

Unlucky to miss the cut in Q2 was the second McLaren of Lando Norris, Sainz having pipped him by a tenth to reach Q3.

Both with a time of 1:16.854, AlphaTauri’s Daniil Kvyat got the nod for 12th ahead of Kimi Raikkonenon virtue of setting his lap first, although the latter can take some consolation in having bested his former Ferrari teammate Sebastian Vettel by 0.004s, the German’s season continuing its downward trajectory.

Romain Grosjean was both P15 and the last to make Q2, a particularly notable accomplishment given it was at the expense of Italian Grand Prix winner Pierre Gasly, the Frenchman simply being unable to put a solid lap together.

Haas’ Kevin Magnussen was 20th and last, a further 0.028s back, delivering the exact sort of performance he doesn’t need at a time when his boss Guenther Steiner is weighing up his future with the team. 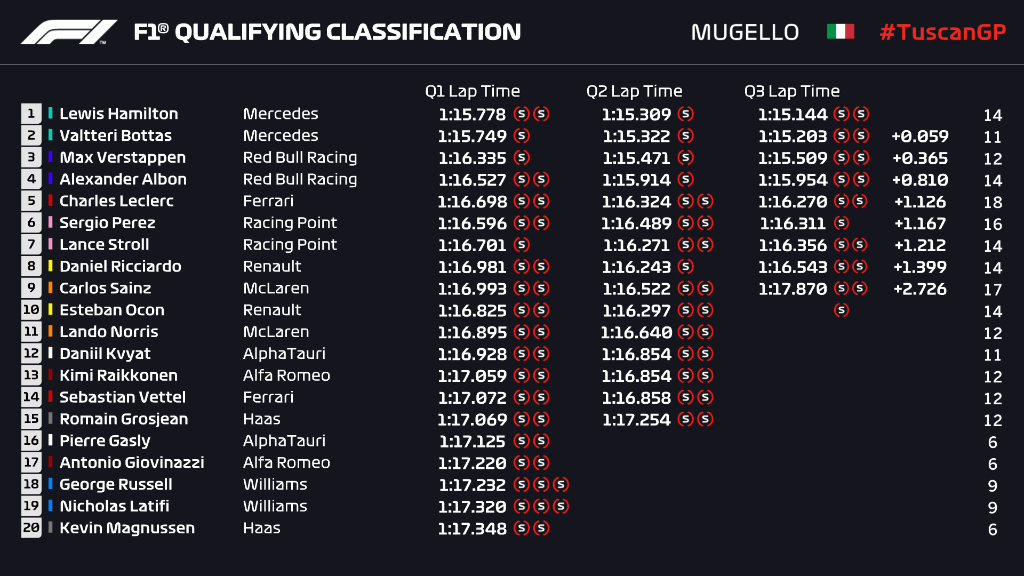