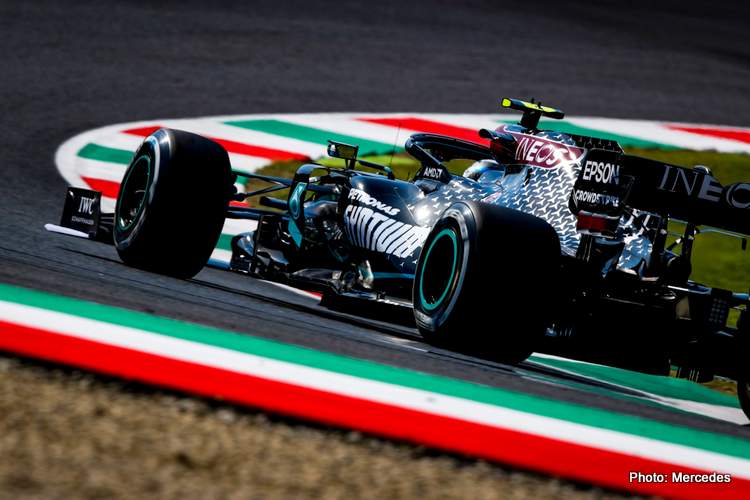 Valtteri Bottas continued to have the edge over his Mercedes teammate Lewis Hamilton during the final free practice session the Tuscan Grand Prix weekend but the pair were split at the top of the timing screens by Red Bull’s Max Verstappen.

After the power deficit of the past two races, Verstappen signalled his intent to take on the World Champions at a circuit that suits the Red Bull package at his disposal.

Given a hint of chance and the Dutchman rises to the occasion, which appears to be happening as this weekend at Mugello evolves.

In comparison, Alex Albon in the other Red Bull was down in eighth, one second off the pace while Italian Grand Prix winner, Pierre Gasly, plonked the AlphaTauri in fifth, splitting the Racing Point duo. Daniil Kvyat was ninth making it all four Honda-powered cars in the top ten.

Lance Stroll was quickest in the pink cars with the fourth-best time, half a second shy of the top time but a couple of tenths up on teammate Sergio Perez in sixth.

Ferrari! It was always known that the woeful SF1000 would be a handful around Mugello. And indeed it is but that has not stopped Charles Leclerc flinging the ‘brown’ car around the splendidly challenging track owned by the Scuderia.

His effort of 1:17.488, nearly a full second off the top time, was good for seventh and, tellingly, six tenths up on Sebastian Vettel in the sister car down in 18th only slower than Lando Norris who was running in his repaired McLaren after crashing in FP1.

Romain Grosjean extracted some pace from the finicky Haas to end the session tenth, half a second shy of Leclerc, the quickest of the Ferrari posse. Conversely, Kevin Magnussen, in 15th, could not find the four-tenths his teammate found in the VF20.

The Renault-powered brigade, on a high after the recent power-friendly circuits, have been found wanting so far this weekend unless, of course, they are keeping their powder dry for when it matters.

But on the evidence of FP3, they may be in trouble. Esteban Ocon, in 11th, was fastest of the quartet, 1,2 seconds down on the benchmark time followed by McLaren’s Carlos Sainz, a tad slower in 12th, Daniel Ricciardo down in 17th and Norris 19th.

George Russell did no laps in the one-hour session as brake issues kept his Williams in the pits.

With The Mercs way up ahead as they are expected to be no matter the venue this year, Verstappen has again embraced the role of David as he takes on Goliath once again.

The stage is set for a humdinger qualifying session this afternoon, aptly summed up by Jenson Button: “There is one-tenth between the top three. This is proper exciting. And the top 10 is so mixed up behind.

“You’ve got Gasly, last week’s winner, in fifth. You’ve got Ferrari back in the top 10 with Leclerc. And you’ve got Grosjean in the Haas in there too. Very exciting,” added the 2009 F1 World Champion. 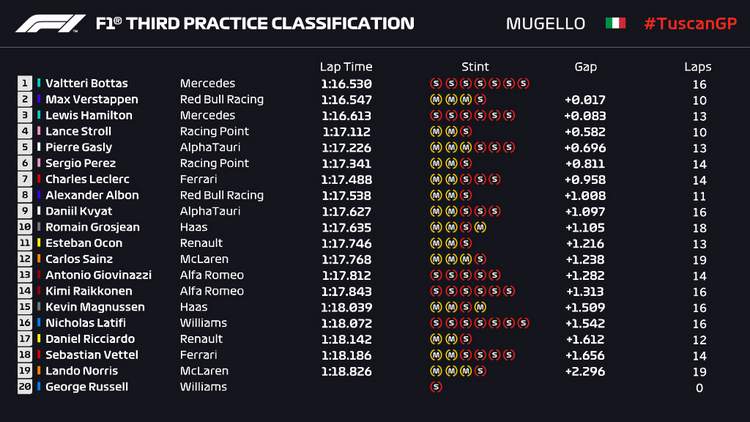