Norris: One of the first proper costly mistakes I’ve made in F1 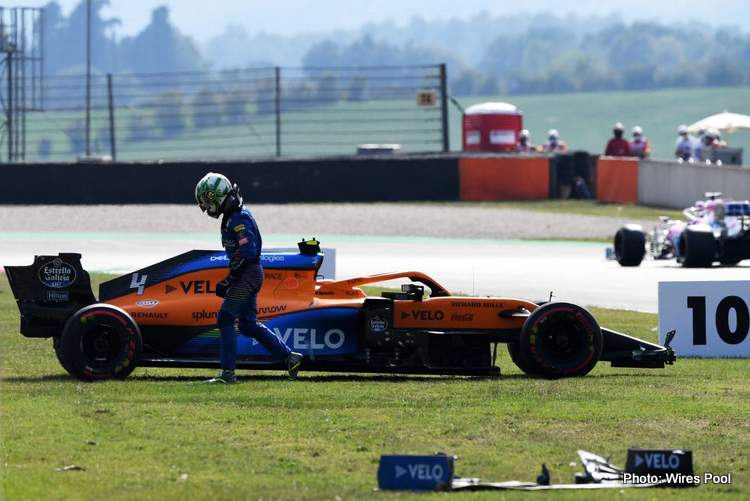 Lando Norris crashed in practice for the Tuscan Grand Prix at Mugello on Friday but his spirits were lifted by Formula 1 allowing fans back into the grandstands for the first time in a COVID-19 ravaged season.

Of his afternoon, the McLaren driver said, “Tricky day. Obviously, I didn’t end it in the best way – over-pushing it a little bit.

“It’s one of the first proper costly mistakes that I’ve made, almost since I started in F1. It’s a bit frustrating, but at the same time it happens – it happens to everyone. Not ideal but everything until then was going reasonably well.

“We made some improvements from FP1 to FP2 but we’ve got a lot of work to do. It’s not been as straightforward as we were hoping for, and we’re struggling a little bit more than we were expecting coming into the weekend. Rough start, but I’m confident we can make up for it tomorrow.”

Norris walked away from this crash in FP2 🚩#TuscanGP 🇮🇹 #F1 pic.twitter.com/ykfauVB7JE

For the first time this season fans will be at a Grand Prix, albeit a drastically reduced number, nevertheless, Norris said the lucky few had made a big difference after racing in front of empty grandstands at usually-packed circuits like Silverstone and Monza.

The last eight races have all been behind closed doors.

“I think its only about 3,000 but you notice it straight away,” the Briton told Reuters in a zoom interview. “We’re in the garage, sitting in the car and you see the fans waving the flags in the grandstand opposite.

“But you are hearing them shouting and some of the horns, and they’re waving. It just feels so much nicer, so much more normal and cool and the atmosphere is coming back slightly,” he explained.

Norris, whose popularity has soared after racing online during the lockdown when the championship was delayed by the pandemic, said hearing the fans made the racing “more special and enjoyable and entertaining.

“It means a lot more I think to the drivers,” he added.

Russia, next up after Mugello, is planning concerts, fanzones and entertainment for their grand prix in Sochi and selling tickets with talk of a crowd of up to 30,000.

Turkish Grand Prix organisers, with a race outside Istanbul on Nov. 15, have talked of hosting up to 100,000 fans — if conditions allow.