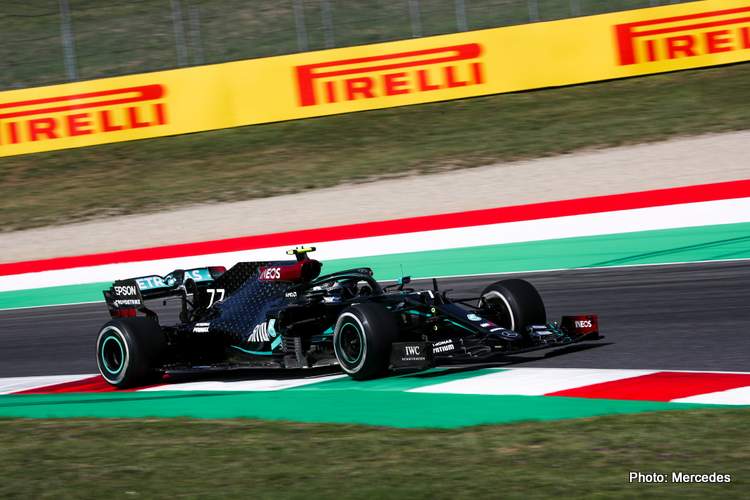 While it was business as usual for Mercedes’ Valtteri Bottas out front, Charles Leclerc provided a pleasant surprise for the local fans in FP1 at Mugello on Friday.

Setting the pace with a time of 1:17.879, Bottas was just 0.048 seconds ahead of Red Bull’s Max Verstappen, with Leclerc 0.259s further back in an encouraging display for the spectators that have been allowed into a Formula 1 race for the first time this season.

The fifth-straight FP1 Bottas has led the season, the Finn will be hoping this is the race he can finally capitalise on his early pace to earn his first race win since the season-opener in Austria.

In contrast, his Mercedes teammate Hamilton had a somewhat difficult morning, with the team suspecting “power unit damage” as he finished fourth, over half a second off the pace.

Verstappen and Red Bull, who will expect Mugello’s high-speed corners to suit their chassis, will be buoyed by the slim gap to the front, although it is fair to expect more to come from the Black Arrows.

Nevertheless, that shouldn’t stop Leclerc and Ferrari celebrating what is a rare decent result amid a dismal run of form.

Behind the top four was last week’s race winner, Pierre Gasly, 0.267s adrift of Hamilton, his teammate Daniil Kvyat completing completing an AlphaTauri sandwich with the Renault of Esteban Ocon in the middle.

Lando Norris was P8, over a second off the lead, with Alexander Albon and Daniel Ricciardo rounding-out the top ten.

Alfa Romeo’s Kimi Raikkonen was just outside the top ten, fellow Ferrari customer Romain Grosjean beside him with works driver Sebastian Vettel right behind in 13th.

Antonio Giovinazzi was P14 with a 1:19.322, Monza runner-up Carlos Sainz next to him with McLaren opting to test its experimental nose over pushing for outright pace.

Williams’ George Russell was a mere 0.021s behind in 16th, ahead of Kevin Magussen in P17.

The two Racing Points of Lance Stroll and Sergio Perez had a very quiet session, finishing 18th and 19th respectively.

Nicholas Latifi brought up the rear in his Williams, the only driver outside two seconds of the fastest time. 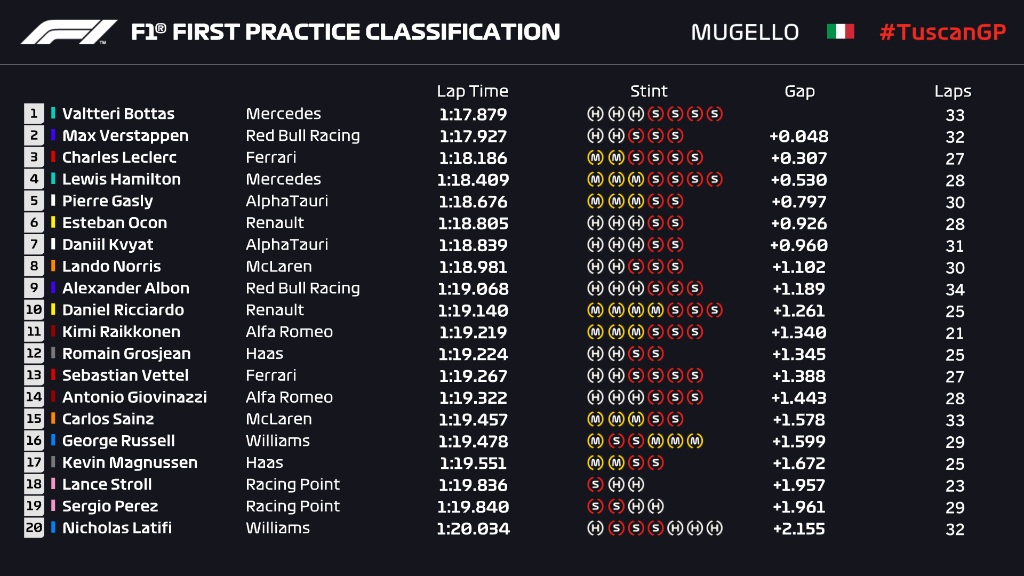