Gasly: It’s pretty special to receive such praise from Lewis 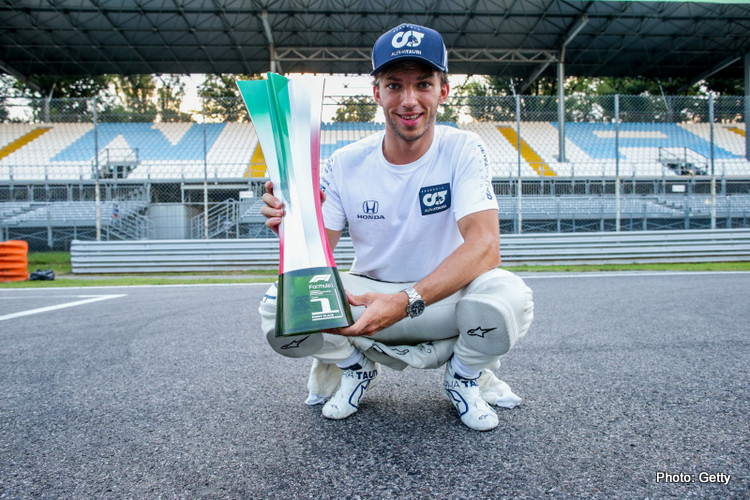 AlphaTauri’s Pierre Gasly says he was moved by Lewis Hamilton’s words of praise after winning the Italian GP, having looked-up to him since he was 10-years-old.

Hamilton, a six-time Formula 1 world champion, was effusive in his praise for the Frenchman after his shock victory at Monza, saying he “deserved the success” after being dropped by Red Bull, with his performance proving they had made a mistake.

Appearing on the ESPNF1 podcast, Gasly was asked about Hamilton’s comments, and admitted they meant a lot to him.

“For me Lewis is a very special guy,” he explained. “Someone I really looked at when I was a kid and in my eyes is probably the best driver we ever had in F1, or at least part of the two or three top guys if not the best guy.

“So when I heard the words he said it’s obviously very touching and unbelievable, because for me it feels strange because these guys I looked at since I’m 10 years old and was always a great example to follow and now I’m racing with him and he’s talking this way about me.

“I got to know him a bit more in the last two years, we actually texted the day before on Saturday, before the race, and all over the weekend, as I wanted to ask him some advice on other things. He’s been always very nice to me, very open, always trying to help.”

A friendship that grew closer during lockdown, Gasly and Hamilton played games of Call of Duty together, working together as teammates.

“It was actually nice because we started to discuss F1 and got to know each other a bit more,” Gasly said of their shared PlayStation sessions. “I got a lot from that time and I feel like when I need a couple of advice I am free to reach him and he’s always really open and willing to help me back. He’s a very nice guy.”

Indeed, as much as Gasly values Hamilton’s friendship, he is not afraid to use the Briton as a resource.

“I really like to question and try to understand how did they manage to get their success over the years and really to keep the momentum.

“What’s impressive with Lewis is he’s been on top since year one in F1 and has gone from strength to strength every year. He is at the top level since his first season in F1 and for me that’s unbelievable.

“Obviously, everything I can learn from him, I try to take everything with me.”