Seidl: There’s a reason why Ferrari went for Carlos 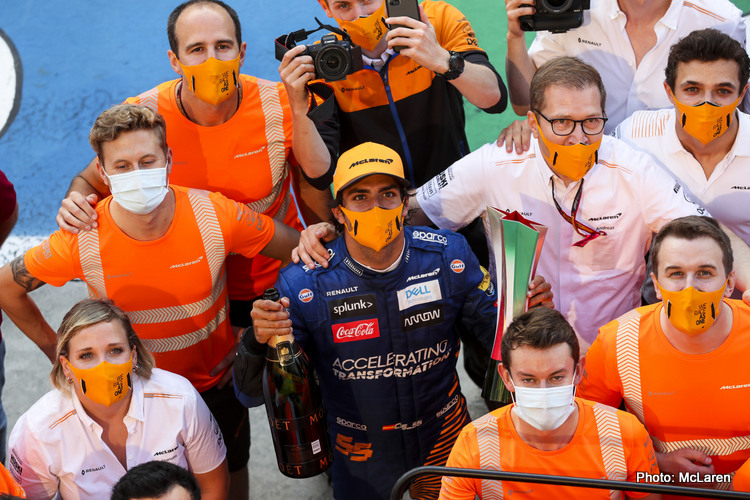 Carlos Sainz’s second-place in the Italian Grand Prix was just further proof as to why Ferrari have signed him for the 2021 Formula 1 season, says McLaren boss Andreas Seidl.

Having qualified third for the race at Monza, Sainz had already turned heads on the weekend, but earned himself in more plaudits with his fighting drive to second place.

Initially gaining a place at the start with Mercedes’ Valtteri Bottas slipping back, the Spaniard’s day seemingly took a turn for the worse when a red flag shortly after the end of a safety car period in which he’d pitted saw him jumped by several rivals.

P6 at the restart, Sainz back up the field, ultimately finishing just 0.415 seconds adrift of winner Pierre Gasly.

Afterwards, Sainz admitted he felt “rage” having lost-out due to the red flag, but quickly realised he had no choice but to crack-on with the task at hand.

“I just put my head down, tried to do everything I could to focus on catching them both and had a great battle with Lance [Stroll] on lap 1 [of the restart].

“And then from then on, with that medium tyre that didn’t feel great, I just pushed as hard as I could to try and make it to Pierre – and nearly did.”

According to Seidl, the Spaniard’s combination of speed and mental toughness proved why he had become such a hot commodity.

“From the first lap onwards Carlos was impressive,” he said. “It’s also not a surprise for us because we know what he can do, and it’s also clear there’s a reason why [Ferrari] went for him, as they believe in him as well.

“In the end he’s the hero behind the steering wheel that had to pull it off and he did it. He did great starts, great restarts, great overtaking, and in the end he deserved this great finish.”

The second podium of Sainz’s career after the 2019 Brazilian Grand Prix, the Spaniard now sits equal-ninth in the 2020 championship, with 41 points.