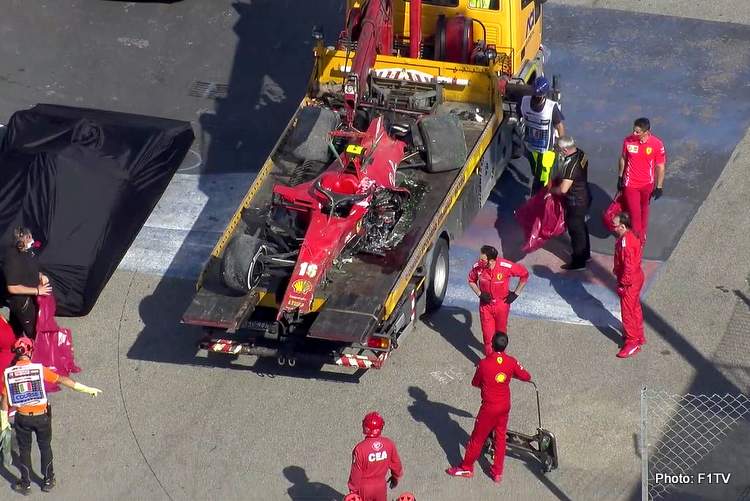 The turning point of the 2020 Italian Grand Prix was triggered when Kevin Magnussen parked his ailing Haas at the entrance of the pitlane, this prompted a safety car and a dash into the pits by runaway leader Lewis Hamilton.

The Mercedes driver failed to see the pit-entry-closed sign and was penalised, the ensuing drama and red flag period concocted a marvellous result for Formula 1 with Alpha Tauri’s Pierre Gasly scoring a historic maiden victory followed home by McLaren’s Carlos Sainz and Lance Stroll in the Racing Point.

In the wake of the riveting race, there have been suggestions that Magnussen’s plight did not warrant a safety car despite the fact that marshalls were pushing the Haas mere meters from cars exiting the Parabolica at highspeed. Some going as far as saying the whole afternoon was concocted.

Not long after the Magnussen incident, Charles Leclerc crashed his Ferrari heavily into the outside barrier of Parabolica, the impact was big the damage substantial to barrier and car, prompting the red-flag stoppage as the wreck was removed and the barrier repaired.

Around the same time, the stewards took longer than expected to dish out Hamilton’s penalty relative to the time they took to decide on Antonio Giovinazzi’s similar infraction when the Italian pitted his Alfa Romeo at the same point.

Why did Magnussen’s car need to be pushed into the pit lane? Seemed like they were going to push the car through the gap…
MM: It’s actually not a gap in the fence. That there, and as the drivers and teams are all made aware, there’s some of openings are vehicle openings, some of them are just marshal posts. The ones that have the shorter orange band effectively are only a marshal post, and the car would not fit at that area. So the only safe place to remove that was to push it down into pit lane because there was no other opening available.

Why was there a red flag for Leclerc’s accident?
MM: Quite simply it was the damage to the safety barriers and the tyre barriers and the conveyor that needed to be prepared to ensure that the circuit was back to the same safety condition. So that was a very simple decision.

Is the penalty for the pit lane the same always?
MM: Yes, it is. In the sporting regulations, and it was actually detailed in the stewards’ decisions for both Lewis’s offence and Antonio’s offence, is that it’s very clear that the penalty under Article 38.3d “will be imposed on any driver who in the opinion of the stewards entered the pit lane for any other reason whilst it was closed”. The simple part is that there is no flexibility within that. The stewards had a mandatory penalty that they must apply.

Previously more lenient, Ricciardo got a 5s penalty at Brazil 2016 for the same offence, why was the tougher penalty introduced?
MM: I can’t tell you because I wasn’t here in 2016. All I can use is the regulations that are before me, and further to that, all of the mandatory penalties were actually gone within the sporting regulations, went through one by one with all of the team sporting directors last year, to see those that we collectively felt needed to be changed, versus those that had to stay in. The sporting directors unanimously agreed they had to stay. All of the teams are well and truly familiar with the mandatory penalties within the sporting regulations.

How long after the pit lane closure did Lewis cross the entry?
MM: From memory, and give or take, I think it was, I can tell you where he was on the track, versus time, but he was entering Turn 11, the Parabolica.

Why did the Hamilton decision take longer than the Giovinazzi one?
MM: It probably didn’t take a lot longer, it’s just that all of them have to come up individually, sequentially with everything else that was going on. Additionally there was also the safety car that took place. We effectively had all of that happening, one thing after the other, and obviously Charles’s incident being straight after that, it was trying to get through effectively a great deal to deal with in a short space of time.

Red flag tough on those who pitted to change tyres, Sainz and co. very unhappy – any regulation solution to stop this kind of unfairness?
MM: From that perspective, and from my understanding, the race suspension regulations have been as such for quite a long time. Thankfully it’s not something that occurs all that often, and if there are elements of the regulations that need to be reviewed, we will review it in a sporting working group with all of the teams’ sporting directors, and if something is necessary, go through the required process to do it. Nothing will change for the remainder of 2020, but we’ll have a discussion about what happens in the future, learn from it, and see if there’s anything that can be improved. (Interview transcript from Agnes Carlier)