Stroll: A bummer because I think it was our race to win 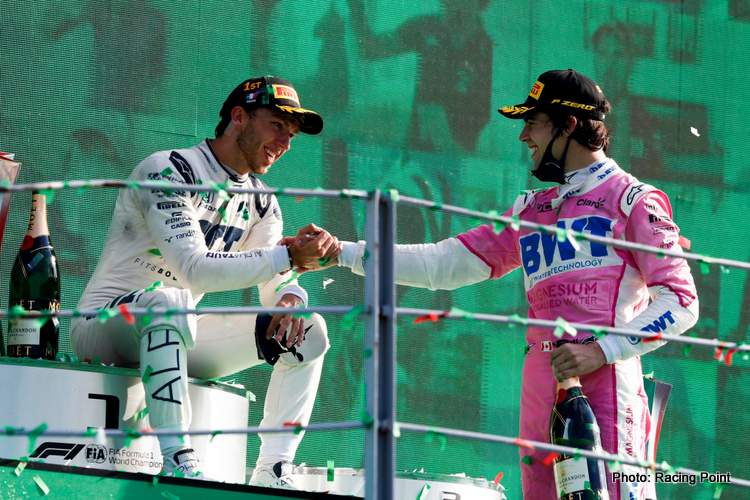 Racing Point have been threatening a podium finish since this season began with their ‘Pink Mercedes’ and, on Sunday, at the 2020 Italian Grand Prix things came good for the team as Lance Stroll took home the third-place trophy.

Starting eighth at Monza, Stroll was up to second at one point when he benefitted from the first safety car period.

Well-positioned for the restart the Canadian was gobbled up initially, but by lap 35 he was back up to third where he stayed, stalking second-placed McLaren driver Carlos Sainz and surprise winner AlphaTauri’s Pierre Gasly – only 3.3 seconds separated the trio as they crossed the finish line.

Lance said in his team’s report, “It’s been a while since I’ve stood on the podium, but it was worth the wait to get my second one! It feels great to be back on the podium, I’m still pinching myself!

“It’s a weird scenario in a red flag situation – we don’t usually get an intermission during races! You just have to reset and prepare.

“Firstly, I want to congratulate Pierre, it was such a crazy race, but he fully deserved that win. He had a great launch at the restart and was so consistent after that. It’s a bit of a bummer for me, because I think it was our race to win.

“I had no grip at the restart and had too much wheelspin, so I lost a few places and fell back to P6. I had a good battle with Carlos after getting some places back – I overtook him but he got me back and I was pushing for the win right to the end.

“We got a bit of luck with the timing of the red flag, but that’s part of Formula 1 and I’ll take it when it comes! Regardless, I’m delighted with third today.

“I’m so happy for the team – thanks to them for giving me such a strong car,” added Stroll who has now jumped to fourth in the drivers’ standings after eight rounds.

Teammate Sergio Prez appeared to have the upper hand before the race, but luck was not on his side, “From my side, it’s been a disappointing day. Anything that could go wrong seemed to happen to us. I had a poor start at the beginning of the race.”

He was also pleased for his team’s podium, “Well done to Lance and the team on the podium, it’s a great result. The main positive is that I was able to recover to get back into P10 and earn a point – and the team had a great day with Lance’s finish too.”

Team principal Otmar Szafnauer added, “Congratulations to Lance and the whole team for today’s podium – the first of the Racing Point era. It was a day all about taking opportunities and I’m very proud of the whole team. Lance battled hard today – making some excellent overtaking moves – and he really deserves this result.”