Sainz: Not disappointed with second but I wanted that win! 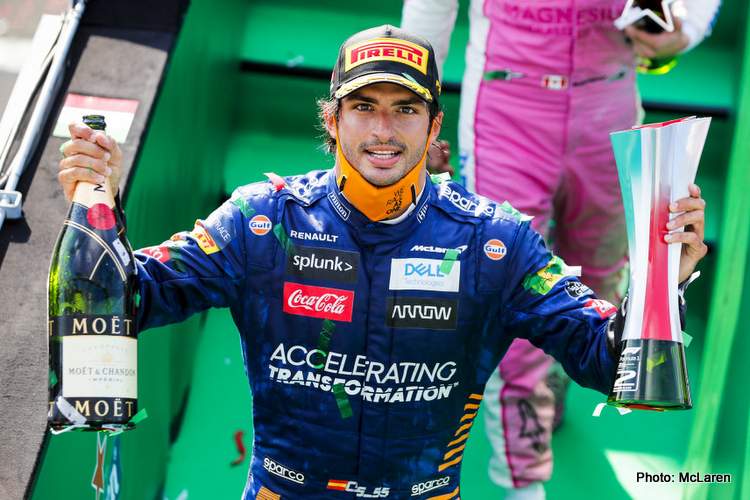 Carlos Sainz scoffed at his engineer when told to hold station when battling out of position Kimi Raikkonen during the riveting 2020 Italian Grand Prix, and with it signalled his intent by scything past the Alfa Romeo to set himself up for a podium at Monza on Sunday.

It was a top-notch drive by the Ferrari-bound Spaniard, showing consistent pace and fighting spirit in his feisty chase of surprise race winner Pierre Gasly; the McLaren falling short by less than half a second as they crossed the finish line almost side-by-side – one more lap would have been enough.

Nevertheless, second place was a splendid result for a resurgent and fully fired-up Carlos., who reported after his second place at Monza, “Well, what a race! Extremely happy to land a P2 here in Monza! Days like today are what make our sport so intense and rewarding. I’m especially proud because I think today we got this podium on pure pace, which is a great achievement!

“I was fast from start to finish and could maintain a great pace throughout the whole race. Without the red flag, being the first car legally on a stop, I could’ve won the race after Lewis got a penalty during the first Safety Car.

“It’s obviously impossible to be too disappointed with P2, but I wanted that win! I did my best to move quickly through the field after the restart and catch Gasly towards the end. Probably missed out by one lap! Still, super happy!

“Thank you to the whole race team for a great effort all weekend and to everyone back at the factory. We deserve it! On to Mugello,” added the McLaren driver.

Making it a truly superb day for McLaren was Lando Norris in fourth, seeing the two orange cars at the very sharp end triggered memories of their golden era. Although it’s early days in the journey to recovery, Zak Brown deserves a hearty pat on the back for turning things around.

Lando was happy with his afternoon’s work, but lamented, “We could’ve had a double podium on merit today, but we lost out to that and the pitlane re-opening. But, I don’t think we could’ve done much more so I’m happy with what I did. I’m also so happy for the team, it’s an amazing result for us all.”

Team boss Andreas Seidl, also deserving huge credit for galvanizing this former superpower, was a happy man, “P2 and P4 at the ‘temple of speed’. It’s a fantastic result coming at the end of a weekend where we’ve been competitive from the first laps onwards. Congratulations to every single member of the team.

“Everyone kept their heads down and focused on executing the race perfectly, resulting in the best finish for the McLaren F1 team since 2014.

“We’re leaving Monza with a lot of positives and looking at the second half of the season with confidence. Tomorrow we’ll reset and begin preparation for next weekend. We need to deliver another strong performance in Mugello.

“Finally, congratulations to AlphaTauri and Pierre Gasly for a sensational victory today,” added Seidl, whose team lie third in the constructors’ standings ahead of Round 9 at Mugello next weekend.