Sainz: I risked the lot and went for it 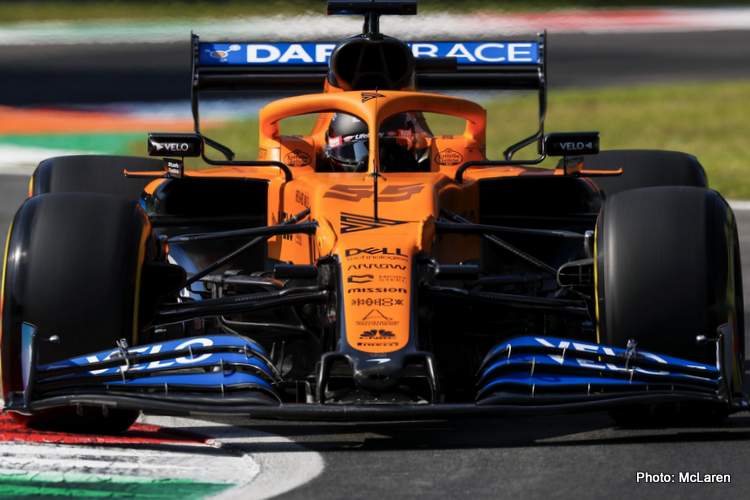 While it was business as usual at the very front with Mercedes cleaning up in qualifying, Carlos Sainz rocked the establishment with a scintillating lap that will see him start the 2020 Italian Grand Prix from third-place on the grid.

The McLaren driver has come of age in recent races and his Saturday afternoon at Monza will remain one of the more memorable of his career so far and further enhancing his growing reputation.

Carlos showed his hand early with the 4th best time in Q1, third in Q2 and then dug deep for his second run in Q3, popped a 1:19.695 to head up row two for the race. The lap left him “shaking” even during his interviews in the media pen.

It was a mighty effort which McLaren team boss Andreas Seidl acknowledged, “Congratulations to the entire team here at Monza and back home, to our colleagues at Renault, and especially our two drivers for putting in this great performance today. Impressive final lap by Carlos.”

Best of the Rest, the Spaniard was chuffed as well and told reporters, “The last lap I nearly messed up in Lesmo 1. I’m shaking a bit because at Ascari I had to just go for it.

“I felt like I was nailing Q1 and Q2 and then in Q3, run one, I was a bit nervy. I needed a strong final corner. I risked the lot and went for it. Into Ascari I was like ‘whoa, that was a bit late.’

“I gave it all in my last attempt of qualifying and managed to pull off a very good lap to clinch this P3. I’m aware the job isn’t done yet and the points are given out tomorrow. I hope we can have a clean race and that we can capitalise on today’s result,” added Carlos.

Lando Norris was only 0.165 of a second down on his teammate, but the margins are such in the packed midfield that this was the difference between third and sixth on the grid.

“The top two are gone,” conceded Norris. “But between everyone else it was very tight and I made a few too many mistakes on my final push-lap, which cost me. There was nothing huge – it would’ve been half-a-tenth to a tenth – but that would’ve put me much higher up on the grid.

“Just a bit frustrated that such small things can cost so much, but that’s just the way it is with the midfield being so tight at the moment,” added the Englishman.

🇮🇹Massive smooth operation today! P3 for tomorrow’s Italian GP! The car felt good, I gave absolutely everything through the whole session and that last lap was exciting! Super tough rivals tomorrow, but we’ll try to capitalize what we achieved today.