Hamilton: I didn’t see those boards and take responsibility 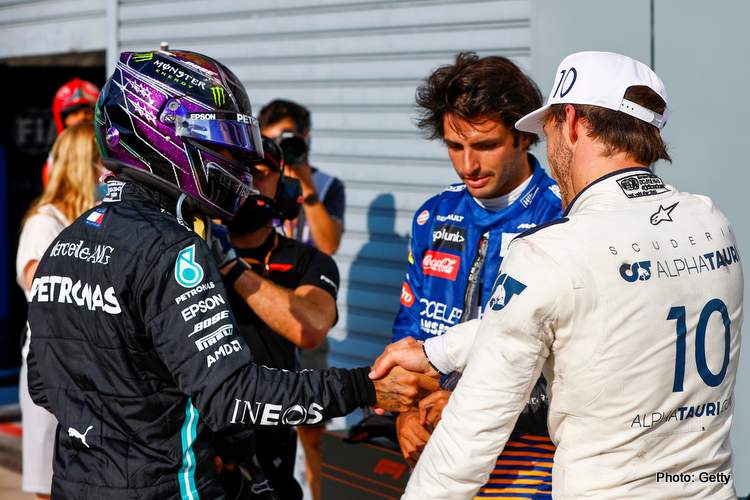 Lewis Hamilton took defeat on the chin after squandering the lead of the 2020 Italian Grand Prix by failing to see the pitlane-closed lights while comfortably controlling the race at Monza on Sunday.

When the safety car was deployed, it seemed a logical decision at the moment but Lewis failed to see the crossed red lights on the outside of the track and was handed a ten seconds stop-and-go penalty which he served after the race was restarted.

Not long after Hamilton’s indiscretion, Charles Leclerc crashed his Ferrari at the high-speed Parabolica, which resulted in a red flag race stoppage as they repaired the barrier which took the brunt of the prang.

The leader served his penalty and emerged stone last and over 20 seconds behind the second last car. With half the race to go, Lewis got down to business, cranking out fastest laps and by the end of it all had worked his way to seventh, despite the Merc being setup for clean air running and surprisingly grunt-less when toiling in the dirty stuff.

Hamilton was gracious in defeat, first stating, “Huge congratulations to Pierre, it’s a fantastic result for him and it’s great to see such a young podium. Obviously, I’ve seen what Pierre’s been through, being dropped from a top team and then beating that top team today. It’s fantastic to see him recover and see him grow, so I’m very happy for him.

Many would have inked in as a certain win for Lewis before the race, in fact, such is the Mercedes superiority that a one-two with teammate Valtteri Bottas, especially in the wake of qualifying where they simply trounced their rivals, enjoying nearly a one-second advantage to next best.

But fate had other plans as the World Champion found out, “My race wasn’t meant to be today but what doesn’t kill you only makes you stronger.

“I didn’t see the boards saying the pit lane was closed because I was following the safety car delta on my dash, so I take responsibility for that and it’s something that we’ll investigate and learn from.

“That stop/go pit stop was long, and I had 26 seconds to catch up to the next car. I was giving it absolutely everything. I honestly didn’t expect to get seventh and fastest lap at that point in the race. And grateful that Max [Verstappen] didn’t score any points, so not a huge loss today.”

“I took a lot of life out of the tyres closing the gap and there was a lot of turbulence from the other cars, which made it hard to follow them. But once I caught up to everybody, it was a fun battle and I still got some good points.

“I’ll definitely take the result and am grateful for it. We’ll move onto the next one and I look forward to it,” added Hamilton who now heads to next weekend’s Round 9 Tuscan Grand Prix with a 47-point lead in the championship standings.

Win in style. Lose in style too. ❤️ #DrivenByEachOther pic.twitter.com/gFzBv3OBdh