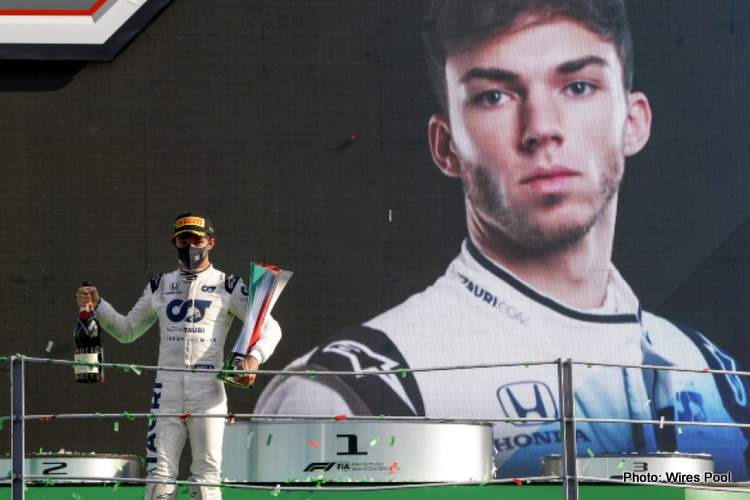 What a Story! The Pierre Gasly Story. Think about: rendered unworthy of driving a Red Bull, demoted back to Toro Rosso mid-season last year – the young Frenchman today turned his career around with an incredible victory in Sunday’s topsy-turvy 2020 Italian Grand Prix.

As a pretext, it must be said that Gasly has been upwardly mobile all season, extracting from the AlphaTauri what teammate Daniil Kvyat has not been able to do, by some margin.

On Sunday the stars aligned in the Frenchman’s favour and when part two of the race got underway, after the red flag stoppage, he found himself leading thanks to a penalty handed to race leader (and expected winner) Lewis Hamilton who had simply romped off into the distance in the first stanza of the race.

When the race restarted, Hamilton had to pit to serve his penalty, and Gasly got by Stroll on lap 28 to take the lead where he stayed until the end despite a stern chase by McLaren’s Carlos Sainz on the final lap.

But Pierre had done enough, by less than half a second, winning his first Grand Prix on merit and against all odds. At the same time giving his paymasters a Red Bull a kingsize headache over their driver line-up as Alex Albon’s struggles continued on the day the guy he replaced in the ‘senior team’ was reaching for the stars.

“This is amazing! I’m lost for words! It’s unbelievable!” declared Pierre in his post-race report.” I’ve been through so many things in the past 18 months and it’s better than anything I expected.

“I focused hard when I re-joined Scuderia AlphaTauri. Day by day, race by race, we improved ourselves and got stronger and stronger – this team gave me my first podium in F1 last year in Brazil and today, these guys gave me my first win in Formula 1, in Italy, in Monza, with an Italian team.

“I’m not someone who gives up on anything, I always fought for everything in my life until I made it to F1. Today it was a great day!

“When I was fighting the last few laps to keep P1, I knew how gutted I would have been if I had lost it, I wouldn’t have been happy with P2. I gave it everything I had – it was difficult – I pushed hard at the start of the stint to not give anyone the slipstream behind.

“The last five laps were so intense, I almost shunted 10 times… I was pushing so hard! My tyres were gone but I wanted that win so much, it still feels weird to say I’m an F1 race winner.

“A big thanks to all of these guys here at the track and at the factory, in Faenza and Bicester, it’s a great day for them too. Most of them are Italian and the HQ is in Faenza, Italy, so to win the Italian Grand Prix is amazing. Thank you all,” added F1’s latest and 109th winner.

Team boss Franz Tost summed up the significance, “Twelve years after the great victory in Monza in 2008 with Sebastian Vettel, Scuderia AlphaTauri was able to repeat itself, again in Monza with Pierre Gasly. This was the best possible result and we’re extremely happy.”

Pierre jumped from 11th in the drivers’ championship standings to eighth with his 25 points haul on the day and became the first Frenchman to win in F1 since Olivier Panis triumphed at the 1996 Monaco Grand Prix – the year Pierre was born!