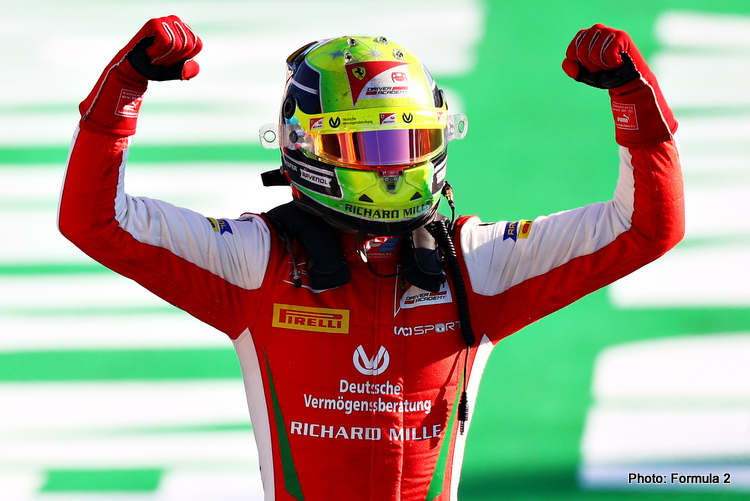 Mick Schumacher ran away with the feature race win in Formula 2 in dominant fashion, clawing his way back into the championship fight as his rivals slipped up at Monza, putting him a step closer to Formula 1.

Mick suffered a late crash in Friday’s qualifying session at the exit of the Ascari chicane that brought out a red flag.

The session was not restarted, producing a somewhat jumbled grid. Championship rivals Callum Ilott and Yuki Tsunoda locked out the front row, Schumacher would start from seventh while championship leader Robert Schwartzman, who was caught out by the red flag, started down in 16th.

Despite the lowly starting position, Schumacher blitzed the start, rocketing up to P2 before the first corner even putting himself in a position to try and take the lead off of Ilott at turn 1.

Schumacher piled the pressure on Ilott for the duration of the first stint. Ultimately, it was in the pits when the pressure seemed to get to Ilott as a stall in the box cost him the lead.

With the pit phase subsiding, it was Schumacher who emerged in front with a comfortable margin to the cars behind. A determined Ilott would chargeback with fastest lap after fastest lap but would only manage to reclaim up to sixth position.

At the end of the 30-lap affair, it was Mick Schumacher who remained cool, calm and collected to take the chequered flag first ahead of Ghiotto and Lundgaard who rounded up the podium.

Shwartzman, who came into the round as championship leader, staged an impressive charge up the field from 16th breaching the top five at one point, However, an early pitstop saw the Russian’s tyres fall off as he dropped back to ninth place.

As a result, Ilott and Shwartzman are now tied at the top of the championship on 134 points apiece with Schumacher back in the picture on 131. The latest developments in F2 begs the question, who holds the key to Ferrari’s castle?

To see the Schumacher name on top at Monza again certainly benefits the German as the pendulum seems to swing back in his favour.

“It was great!” was Schumacher’s immediate reaction.  “The pace we had was really good, but I have to say thanks to my team for getting the car back in shape after yesterday!

“When you are pushing, you are obviously trying to improve yourself and I went a bit over the limit and therefore ended up in the wall.

“It was a long night for the boys, so I really wanted to get good points for them. I didn’t think that I was going to win, but I wanted good points and a good race for the guys. They stayed up until 2am yesterday and worked on the car to get it ready. They did that and they did it in style, so I am very, very proud of them.

“This race is for them. We as a team really deserve this one. It was a really good race, everything just worked, and I am really, really happy.”

With a much-needed win to his name, Mick has shown his critics why he is among the favourites for a seat in Formula 1 in the not too distant future. Momentum is everything in motorsport, and should Mick be able to carry it forward, he has every reason to be in with a shot at Alfa Romeo.