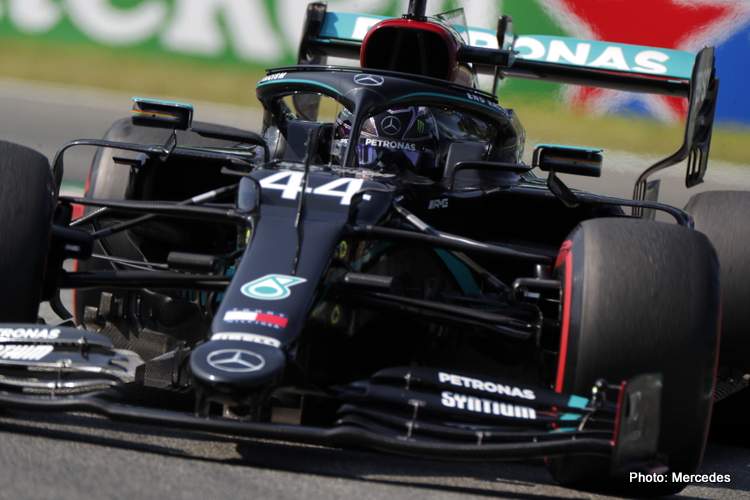 Lewis Hamilton claimed the top spot start for tomorrow’s Italian Grand Prix, Round 8 of the 2020 Formula 1 World Championship, at Monza. And yes there was traffic, resulting in some upsets and a rant or two.

Valtteri Bottas was second by less than a tenth and Carlos Sainz stunning the paddock with third place in the McLaren, while his soon to be team was in total shambles.

It was another miserable afternoon for the Ferrari brigade, the Scuderia enduring their worst qualifying since 1984. Sebastian Vettel condemned to Q1 in 17th after getting tripped up in an inevitable traffic jam.

Charles Leclerc, after his final run only good for 13th despite his mega-effort, murmured over the radio, “The best I can do… best I can do.”

The misery was further compounded for their customer teams: no Haas nor Alfa Romeo in Q3. Cruelly, COVID-19 is a blessing in disguise which has spared Tifosi the embarrassment of having to watch this descent to rock bottom from the grandstands at Monza.

At the sharp end, Bottas and Hamilton traded places at the top of the timing screens, but in the final run the World Champion had the slightest edge and will start from pole for a record 94th time on Sunday.

Lewis said afterwards, “It was not too bad. Fantastic performance from the team today in terms of timing when they put us out on track. It was not the easiest – you saw how close it was between us all – and it really demanded a clean lap. I think I did that on both, so I’m generally really happy.

“I made some big changes going into qualifying, so I was a bit nervous whether it was the right thing to do, but it worked just fine.”

For the umpteenth time, Bottas had no answer but is confident he can give his teammate a run his money on race pace tomorrow, “It was really close as I was expecting. I was running first this weekend. Not sure with the tow, I obviously didn’t have any, expect in Q2 at the end and it felt a bit of a benefit.

“In the end I was on my own, it’s not too bad a place to be, but obviously I didn’t get any gains on the straight line. My long-run pace was good compared to Lewis. Still all to play for.”

Eight-tenths of a second was best of the rest, and a pleasant surprise as Carlos Sainz gave his shares a major boost popping the McLaren into third place. A tenth and a bit was the difference between the Spaniard and teammate Lando Norris in sixth. That midfield is tight!

Sainz summed up his afternoon, “I’ve been feeling very strong since the start of qualifying. I managed to go through only with one set with a very strong lap in Q1 and since then it was just chipping away to try and put that 19.6 on the board, which I knew would give me top five.

“The last lap I nearly messed up. I had a big moment in Lesmo 1 and I nearly lost it and since then on I had to drive like this and I’m actually shaking a bit because in Ascari I had to really go for it. I thought the Renaults were going to be quicker this weekend, but this lapped helped.”

Perez looked sharp all session long in the Racing Point and at one point we looked set for a Mercedes top three, but Sainz’s giant effort scuppered that headline.

Nevertheless, the Mexican will start from fourth on the second row from where he would fancy his chances at a podium, especially if it proves to be a race of attrition; the type in which he always excels.

Red Bull have yet to find the sweetspot around Monza, Max Verstappen again compromised by a package that this time was nearly a second off the best the Mercs had to offer, condemning the feisty Dutchman to fifth on the grid.

Max admitted to TV reporters, “We have been struggling all weekend. I tried everything but the lap time was the same. The car is not where we want it to be, the balance and grip in general.

“There a lot of things we have to work on. We just didn’t do a good job. We can still get a podium. Monza is a special track but we struggle here.”

Lance Stroll messed up his run with an aggressive kerb-hopping moment that denied him the three-tenths his teammate found in the handy pink package. The Canadian was eighth.

Alex Albon was enjoying an improved weekend to Max in the sister Red Bull, but that came to zero in qualy. The Thai driver erred on track limits too often when it mattered, in Q3 he was three-tenths shy of his teammate and less than a tenth up on Pierre Gasly in the AlphaTauri. Daniil Kvyat never made it out of Q2 and will start 11th.

The never-ending Ferrari spiral towards the back of the grid, Monza cruelling exposing them, will be the talking point throughout Italy as the team reel with punches with a punchless engine package.

Leclerc summed up the pain, “It is like this. It is tough. For now, it is like this and I need to extract the maximum out of the car. It hurts even more once it is at home. It is our reality at the moment. We need to work.”

On another day of Mercedes excellence rewarded with dominance, it is clear that not having Ferrari at the sharp end on a regular basis dilutes the contest, and is now a crisis beyond Maranello, rather one for all of F1 aggravated by the backdrop that is Monza – the Temple of Speed – where Ferrari are expected to lead the charge every time they step up to the plate. 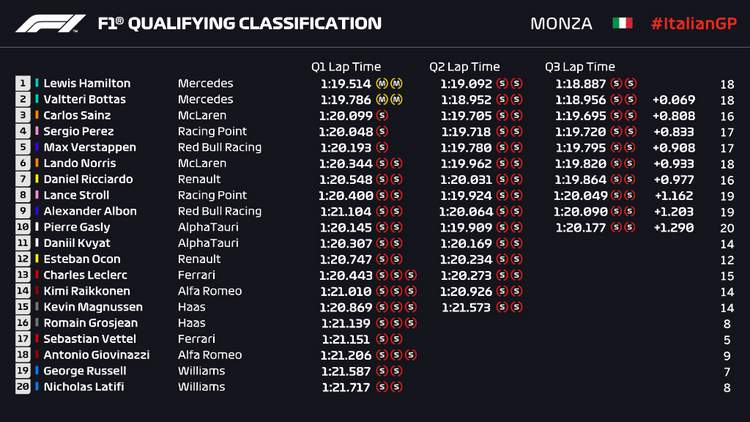