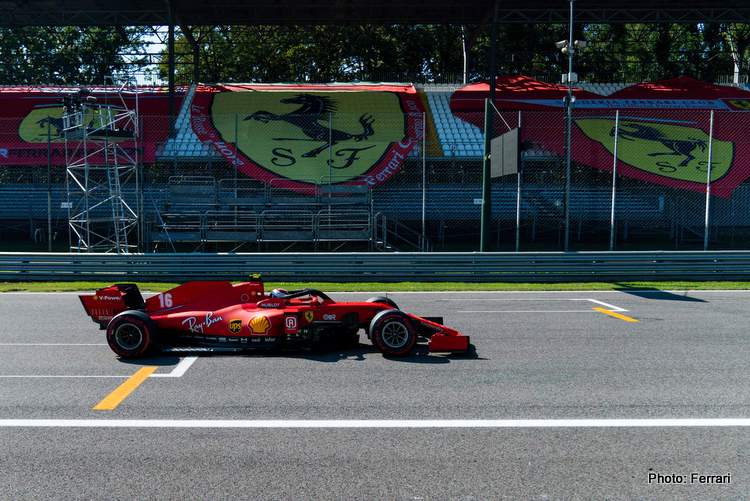 “Porca miseria!” would aptly sum up the qualifying session Ferrari endured on Saturday for the 2020 edition of their home Italian Grand Prix, suffering their worst Saturday at Monza since 1984.

Indeed their qualy-report did not beat about the bush, “A Saturday to forget for Scuderia Ferrari in terms of qualifying for the Italian Grand Prix at Monza. Charles Leclerc was 13th while Sebastian Vettel did not make the cut out of Q1 because of traffic and ended up 17th.”

Laurent Mekies Sporting Director echoed the sentiment, “The result is very disappointing but unfortunately, hardly surprising. As was the case in Spa a week ago, we knew that on tracks like these, with characteristics that highlight our car’s weaknesses, we would struggle.”

Those weaknesses in the SF1000 resulting in a loss of almost a second to its predecessor – the SF90 – which was on pole here in the hands of Charles a mere 12-months ago.

Unsurprisingly, their customer teams have suffered the same plight, all gone backwards during the same period while their rivals found anything from a quarter-second to around three-quarters of a second, even with ‘party-mode’ banned.

Last year’s pole man and race winner was morose when facing the TV cameras and later summed up his afternoon, “Coming into the weekend we expected it to be like this. We knew that Spa and here are probably the two worst tracks for us but this is our situation at the moment.

It’s tough because once you do a good lap and you end up P13 it doesn’t feel good. But for now I need to try and extract the maximum out of the car in the situation we are in.

“Of course, it hurts even more as this is our home race, but it’s the reality for us at present, unfortunately. We need to work and hopefully, Mugello, which is still home soil for Ferrari, will be a bit better than here.

“Last weekend and here, we have been trying many things on the car, but we are not finding a solution. So we need to keep our head down, stay motivated, and I’m sure better days will come.”

Vettel was tangled in traffic, a place he is never at ease in, and as a consequence never got a decent crack at a hot-lap. His effort was seven tenths shy of his teammate’s time which is a larger deficit than the three-to-four-tenths the younger driver has on the four times F1 World Champion these days.

He said in the team report, “There’s not much to say about this session. There were a lot of cars in front of me when I started my second quick lap. In that moment I knew it wouldn’t be possible to improve my time.

“I don’t know why the other drivers started to overtake on the warm-up lap. I found myself in the middle of the mess and didn’t get a lap. Everybody should stay in the position they are in the line, then everybody opens a gap and it should be fine to set a time.

“From our side, probably we didn’t pick the right time to get back on track and some others managed to do better than us, as they improved. Of course, starting from so far back on the grid means it will not be an easy race, but you never know what can happen and we will see what we can do.”

Whatever the case the stark reality is that the best Charles could get out of the Ferrari was 1:20.273, a concerning 1.386 seconds down on Lewis Hamilton’s pole-winning lap of 1:18.887.

Race day pain could be far worse; scoring a point, let alone points, will be a challenge and the distress of being lapped by Mercedes on home soil a humiliation that could well play out in the 53 lap race at the Temple of Speed.

Sadly, Ferrari’s cancer of ill-performance has spread to Haas and Alfa Romeo as well, none of them progressing beyond Q2 and a point-less Sunday for Ferrari-powered cars is a very real possibility.