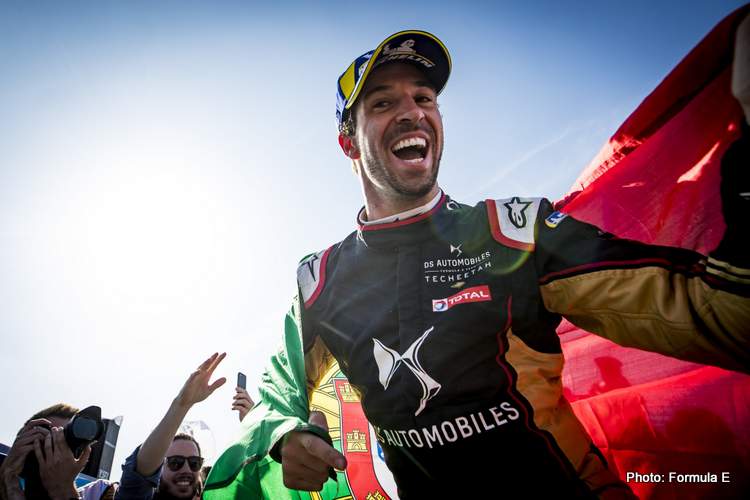 António Félix da Costa is on a high at the moment, after securing the latest Formula E title, he is now working to secure a Formula 1 drive for his home Grand Prix which may lead to a more permanent presence in the top flight.

Winning the title has boosted the Portuguese driver whose shares are soaring in the motorsport market, with teams from several categories interested in securing his services.

Former F1 driver, Tiago Monteiro is part of  António’s management team and confirmed to Grand Prix 247 that there is interest from Formula 1 teams in having his protégé drive for them.

“António is in demand at the moment – IndyCar, Le Mans and Formula 1 – there is loads of interest in him. I made some contacts, and I was also contacted. But we cannot forget that he has a contract with DS-Cheetah, but anything is possible,” explained Monteiro.

The Portuguese Grand Prix – on 23 to 25 October – is central to António’s plans, as there is interest from the race organization in having a local driver in action on the weekend with FOM’s blessing.

Taking part in a Friday practice session is an option, but a race seat on the grid is what they are targeting would such a cockpit be available for the race in the Algarve.

However, Monteiro stresses that any of these possibilities will be real if there is a prospect of retaining a longer relationship with the team that run him, “There is much interest from several parties for him to be in the Portuguese Grand Prix.

“If it happens, we want something more concrete and durable. My role is to get the best solutions for him and to be aware of the market. That’s what I’ve been doing. I don’t want to go into details, but we don’t have anything to hide, time will tell what it will happen.

António Félix da Costa was in the Red Bull junior program and looked like he would have a seat at Toro Rosso, but it was Daniil Kvyat who got the drive, at the time – and the rest, as they say, is history.

Since then, he raced in DTM, WEC and Formula E, securing the Season 6 title and thus putting him himself in line for a shot at F1 which has very narrowly eluded him but fate may yet be kind to him. Watch this space…

BIG day today for @afelixdacosta as he was awarded the degree of Commander of the Order of Merit by Portuguese President Marcelo Rebelo de Sousa 🏅😍 pic.twitter.com/gyF7NUCVTG