Bottas: Not sure how happy Red Bull is now 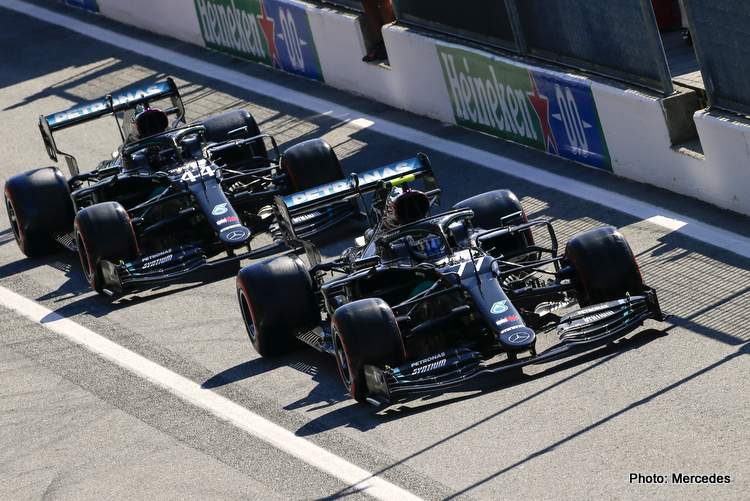 There was little to separate the two Mercedes drivers at the top of the timing screens at the end of qualifying for the 2020 Italian Grand Prix, the two black cars untouchable again as Lewis Hamilton racked up his 94th pole position start, his 68th for his current team.

Valtteri Bottas was only 0.069 of a second shy of the pole-winning time, with Mercedes again easily claiming the front row of the grid for Sunday’s race at Monza despite the ban on their much-vaunted party-mode which, in the end, has hardly made a dent on their dominance.

Lobbyists-in-chief for the rule change reportedly came from within Red Bull, but closing the loophole has made little difference, the results on Saturday remained the same: namely, Mercedes are in Formula 1 while the rest play around in Formula 1.5.

After qualifying, Bottas did not miss a chance to taunt their rivals, “Not sure how happy Red Bull is now with this engine change…” and added, “I think the car felt good, the engine felt good, and like I said before it should be even better in the race.”

Fans wish it indeed were a two-horse race, in which Bottas at least gave his illustrious teammate a good run for his money, Nico Rosberg style. Trying to beat Lewis at his own game is futile, there is no one better. But it can be done as has been proven before, the guy in the #77 car has only to figure out how.

While there is a school of thought that Valtteri is simply the fall guy for a bigger picture of records being broken and the marketing mileage (that’s why they do it) that will follow; meanwhile, the theory goes that Hamilton gets the five-star treatment.

Bottas acknowledged the defeat but remains optimistic for the race, “Of course, it’s disappointing to miss out on pole, especially by such a small margin. My pace has been pretty good all weekend and it was really close out there, as I expected.

“It was tricky with the tow, as I chose to run first this weekend, so I didn’t have any – except during Q2 where I did the fastest time.

“I was on my own in Q3, which wasn’t a bad place to be because you have clean air in the corners but obviously you are not benefitting from the tow on the straights, and it’s a difficult balance to find.

“Still, the laps were good and I’m looking forward to tomorrow. My race pace on Friday was matching Lewis and this track always provides opportunities, so it’s up to me to take them. It’s still all to play for,” added Bottas, carrying the hopes of fans aching for a true contest on Sunday.