Binotto: My managers support me but I questioned myself 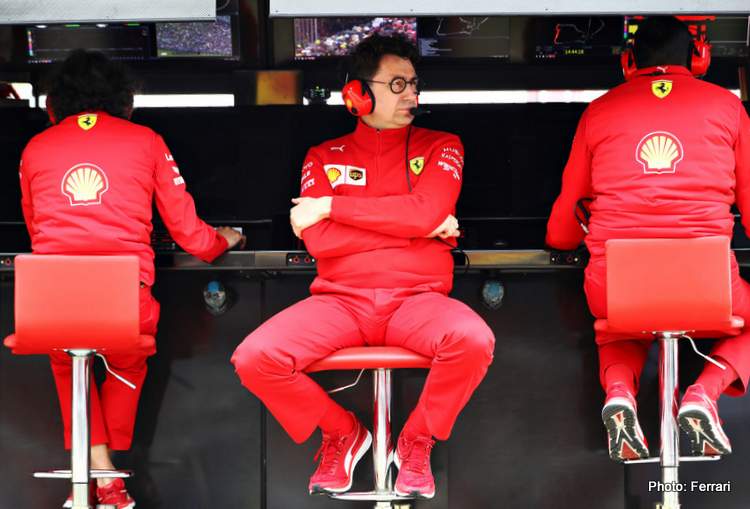 Mattia Binotto has admitted he considered resigning as Ferrari team principal as the team he lads head into Sunday’s Italian Grand Prix in the midst of their worst crisis in a generation.

They are fifth in the constructors’ championship, an eye-watering 203 points behind Lewis Hamilton’s all-conquering Mercedes.

The Scuderia are Formula One’s most decorated team, winning 16 constructors’ titles and producing champions in the form of the likes of Alberto Ascari, Niki Lauda and Michael Schumacher. In all, Ferrari have won the drivers’ title on 15 occasions.

But it is now 13 years since they produced their last champion, Kimi Raikkonen, and a dozen since winning their last constructors’ honours.

Both Charles Leclerc and the soon-to-be-departing Sebastian Vettel failed to finish in the points in Belgium a week ago – the team’s worst single-race performance since 2009 – and the scarlet cars were off the pace at Monza’s Temple of Speed in practice on Friday.

Leclerc finished ninth, with Vettel even further back in 12th. Both had trips off the track with a despondent Leclerc reporting over the radio: “This car is so hard to drive.”

Binotto revealed that Ferrari president John Elkann phoned him for an explanation of the team’s woeful performance at Spa-Francorchamps.

But speaking on the eve of Ferrari’s home race, the team principal believes he has the backing of Maranello’s volatile hierarchy.

“I know I have the support of my managers,” said Binotto, 50. “But I questioned myself. I reflected on whether I can be suitable for the role of team principal.

“I could have done better in some areas, but I believe that my 25 years in F1 and the knowledge of this company are key elements to do well in this profession.

“I’m not alone, I can assure you. With [Ferrari CEO] Louis Camilleri I speak several times a day, and with John Elkann regularly. I get their advice, certainly their leadership style is different from what we were used to in the past. But I’m not alone, not really.”

Binotto has been at Ferrari his entire working life, making the short trip as a graduate from the University of Modena to Ferrari’s Maranello HQ a quarter of a century ago. He was assigned to the role of team principal in January 2019.

Ferrari provided Mercedes with their greatest threat last season, but a secretive settlement with the FIA over the engine they used in 2019 has coincided with their 2020 slump.

Hamilton, predictably fastest here on Friday, beating team-mate Valtteri Bottas to top spot by 0.262 seconds, has won five of the seven rounds to establish a commanding 47-point championship lead. He is dominating the sport just as Schumacher did with Ferrari at the turn of the century.

Vettel was hired as the man to emulate his compatriot, but the German will be off in less than five months – deemed surplus to requirements by a fed-up Ferrari board – with the responsibility of restoring the Prancing Horse’s pride now resting heavily on Leclerc’s 22-year-old shoulders.

“This year is important for Charles, and one day he will be able to say: ‘Those difficulties have been useful to me’,” added Binotto in an interview with Corriere dello Sport.

“He has the talent, and he is also growing as a leader in this difficult time. I often talk to him about Schumacher, who arrived at the team in 1996 and was champion by 2000. He can repeat that path.”

For Hamilton, he will move to within just one of Schumacher’s win record if he triumphs for a 90th career time at a spectator-less Monza on Sunday.

The partisan tifosi have afforded Hamilton a rough ride in recent seasons, but Sunday’s race at one of the sport’s most iconic venues will again be played out against the sad backdrop of scores of empty grandstands.