Russell: I was in the wrong place at the wrong time 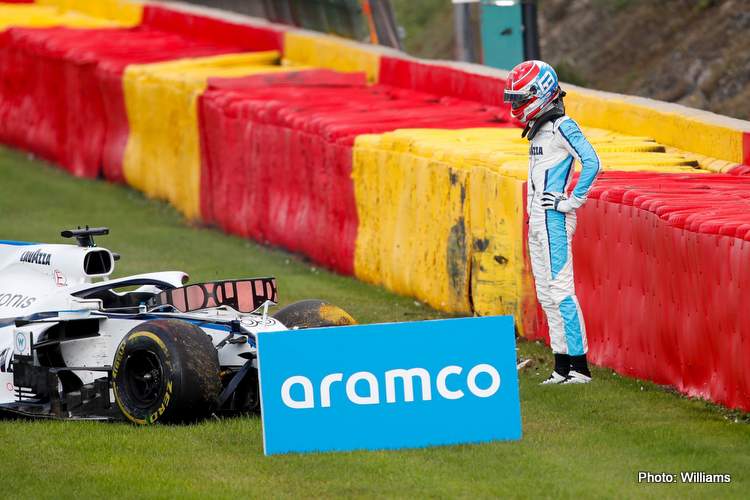 George Russell was luckless on Sunday during the 2020 Belgian Grand Prix, the Williams driver having another strong weekend was the innocent victim in a crash triggered by error-prone Antonio Giovinazzi.

Exiting Campus on the short straight towards Stavelot, Giovinazzi stepped on the gas too early, got on the kerbs lost the rear and crunched his Alfa Romeo into the barriers on the inside of the track, before it bounced across the track before coming to rest a steam wreck with debris scattered everywhere.

Russell, arriving at speed, was unsighted as the front of the Williams collided with a loose wheel and speared through the cloud of debris, hitting the barrier on the outside of the track as he tried to avoid bits and pieces of carbon-fibre and the like.

Both drivers hopped out unhurt as the incident triggered a safety car period for the mess to be cleared.

For Russell 1t was a case of bad luck, and bad timing combining, to be following errant Antonio when the Italian lost it. But, at the same time there was massive good fotune, the halo again did its job, deflecting some large chunks of bodywork that were flying straight at the Englishman’s head.

Feeling unlucky and lucky right now. Gutted, as we were having a great race – but really glad we have the halo on these cars now or it could have been much worse. Thanks for the messages – I’m all good 👍 pic.twitter.com/JrQ8VN9iHl

George summed up his disappointment in the team report, “It is frustrating, I was in the wrong place at the wrong time and there was nothing we could do. I went to the left to avoid Antonio’s car and then his wheel came from nowhere and hit the front of my car which pushed me into the wall.

“It was quite a big impact, but I am ok. I feel very fortunate to have the halo on the car as it could have gone quite near my helmet.

“It was a very unfortunate set of circumstances, but that’s just racing sometimes. Up until that point I was in a good rhythm. I had overtaken the Haas, but it would have been a long and difficult race out there for us,” added the 22-year-old Williams driver.