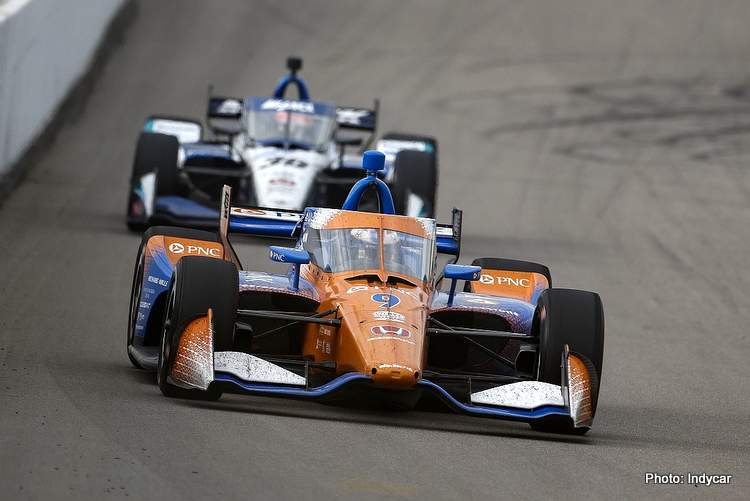 Scott Dixon and Takuma Sato repeated their 20-lap shootout from the Indianapolis 500 a week ago, with Dixon reversing the finishing order Saturday by winning at World Wide Technology Raceway outside of St. Louis.

Sato held off Dixon last Sunday for his second Indy 500 victory in four years. Dixon had 20 laps to chase Sato down, but a late caution ended the race under yellow.

At Gateway, Dixon took the lead by first beating Pato O’Ward out of the pits and then cycled to the front when Sato made his stop with 25 laps remaining. Sato returned to the track in third, passed O’Ward with a bold outside move then set his sights on Dixon.

Dixon had 20 laps to navigate lapped traffic while holding off Sato.

“Sato was coming on strong at the end,” Dixon said. “I didn’t realize how strong he was coming. We were in reserve mode to look out for the engine and he was coming with a head of steam.”

Dixon beat Sato by 0.1404 seconds for his fourth win of the season and 50th overall and praised his Chip Ganassi Racing team. The New Zealander led 111 of 200 laps at Indy but couldn’t catch Sato in the closing laps before the caution froze the field.

“Last week at Indianapolis was a bit of a bummer,” Dixon admitted.

Dixon moved within two victories of Mario Andretti on IndyCar’s victory list. Andretti is second with 52; A.J. Foyt is the leader at 67.

“I’m very lucky and very fortunate,” the 40-year-old New Zealander said. “It’s not just me, it’s the team. I’m very fortunate to work with these guys. It’s them. Fifty is a great number and I’d like to think there’s 50 more.”

Dixon holds a 117-point lead in the IndyCar championship standings as he chases a fifth title. IndyCar races again Sunday at Gateway.

“That was a textbook Scott Dixon race. Steady, one at a time, here, there, nothing fancy,” said winning team owner Ganassi.

Sato finished second for a 1-2 sweep for Honda. O’Ward, the highest finishing rookie in last week’s 500, was third for Arrow McLaren SP in a Chevrolet.

“Towards the end Dixon got us in the pits,” O’Ward said. “We didn’t have enough pace to get up and pass him. I just couldn’t keep up.”

Sato was attempting to become the first driver since Arie Luyendyk in 1997 to win the race immediately following the Indy 500.

“Since last week we carried a lot of momentum,” said Sato of Rahal Letterman Lanigan Racing. “The boys did a fantastic job two weeks in a row, I’m very proud of them.”

Sato also used a bold outside pass on O’Ward and although the cars never touched — O’Ward initially thought there was contact — the close proximity caused O’Ward to wiggle.

“It was nothing risky at all,” Sato said. “We were just able to have a go because Dixon was running away with it. We had fresher tire and I think they helped. I gave him enough room. It was tight.”

The race got off to a rocky start with a multi-car accident when the green flag waved. Alex Palou and Oliver Askew, both rookies, were penalized by IndyCar for triggering a crash that knocked out three cars from Andretti Autosport.

Alexander Rossi, still seeking his first win of the season in a horrible year for the perennial title contender, was collected with teammates Marco Andretti and Zach Veach. It also ended the race for Ed Carpenter and Simon Pagenaud eventually had to retire with damage to his car.

“I was driving straight. I don’t know what you want me to say,” said Rossi, who likened the incident to an iRacing video race.

Earlier in the week Rossi had conceded the IndyCar Series championship to Scott Dixon and adjusted his goals toward winning any remaining races this season.

The current IndyCar schedule lists just five races remaining races in a choppy year heavily disrupted by the pandemic. A doubleheader at Mid-Ohio has been postponed but could find its way back onto the calendar.

Even with a full slate, Rossi has waved the white flag on his championship chances. Dixon opened the season with three consecutive wins and heads into a doubleheader at World Wide Technology Raceway outside of St. Louis this weekend with an 84-point lead in the standings over reigning IndyCar champion Josef Newgarden.

Rossi, a title contender the last three years, is 14th in the standings after his own rough start.

“I’m not looking at the championship by any means, Scott’s definitely going to win the championship,” Rossi said. “We’re going to try and win races. If we could finish in the top three or four or five, I think that’d be a good recovery considering the way things have gone.”

Rossi’s run of bad luck continued at last week’s Indianapolis 500, where a pit lane penalty stuck him at the back of the field. Pushing hard to make up ground in a strong car for Andretti Autosport led to a race-ending wreck.