Bottas: I’ve never heard of that! 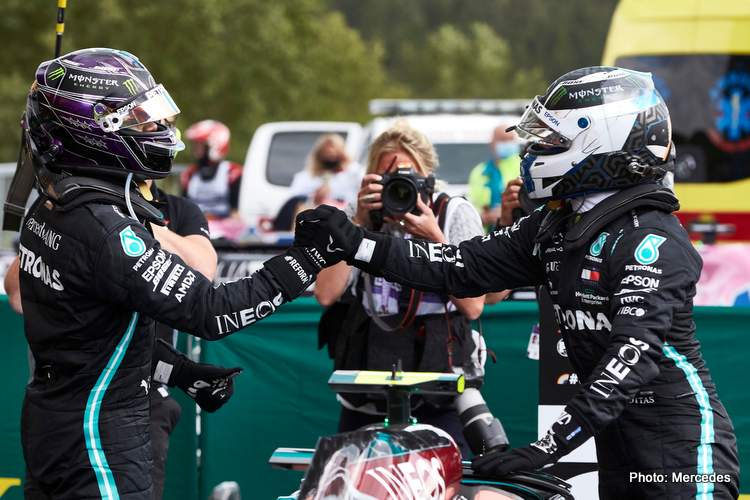 When the two black Mercedes scuttled into the lead right from the very start of the 2020 Belgian Grand Prix it appeared that Valterri Bottas had the pace and inspiration to keep glued to his teammate, fans might actually have a race on their hands was the thinking.

Lewis Hamilton led but could not shake Valtteri who stalked him in the one-to-two-second range, keeping the leader honest. On lap seven, the Finn was ready to attack and asked over the radio: “We have one push now?”

His engineer responded: “We do, but we agreed not to use against each other.”
“I’ve never heard of that!” was the incredulous reply from the #77 cockpit.

And from that moment on Bottas Reloaded unloaded, the fight was switched off and never again did he look to threaten the #44 car that went on to win without unchallenged. The contest cancelled and controlled by the Merc pitwall.

After the race, when asked about the radio exchange after finishing second to his teammate, Bottas repeated, “Actually I had no clue about that. They may have said that at some point but I don’t recall.”

As for the rest of the race, he reflected, “Of course at the start, it would have been a good opportunity but Lewis played it well and I couldn’t really get momentum. Those two things were the difference.

“I just couldn’t catch him on the straight. Lewis is driving mistake-free. I think Lewis was faultless today and yesterday,” added Valtteri, hardly the type of fighting talk one would expect from Hamilton’s only real challenger this year.

Later in the team report he added, “Towards the end of the race, we had to really manage the tyres quite a bit; I was starting to get the same kind of vibration that I felt before the end of the race in Silverstone when I suffered the puncture.

“I had to reduce the pace quite a bit to save the tyres, but it worked out and I’m happy that this time I didn’t lose the points,” which suggests he was reluctant to go on the attack again, the steam knocked out of him with that first message to hold fire.