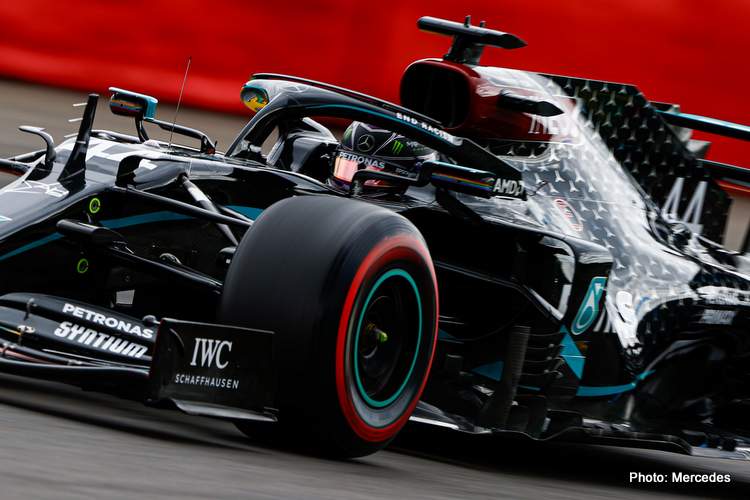 On Saturday afternoon Mercedes drivers were told to use their party-mode and thus revealed exactly what they had, with Lewis Hamilton in his finest form once again delivering a mega-lap to claim his 93rd Formula 1 pole position start.

On the other side of the coin, Ferrari endured one of their worst Saturdays in memory, certainly the worst of the modern era as Charles Leclerc and Sebastian Vettel stumbled out of Q2, while the Scuderia’s two other teams were doomed to Q1.

Valtteri Bottas was the only one with similar kit to stop his teammate, but again the Finn fell short, half a second short! The World Champion was simply, again, on another level… another planet!

His best effort was sublime, near perfect, stopping the clocks at 1:41.252 and a lap-record for good measure.

“That one’s for Chadwick Boseman. Rest in peace,” said Hamilton as he crossed the line.

He added later, “Today was a very clean session. Every lap was getting better and better. There was a lot of great work in the background. We had to get a tow, you’ve got three difficult sections here and wing level not easy.

“We’re not the strongest in the first and last sector but the middle we definitely are. I chose to go out first ahead of Valtteri. I didn’t want anything getting in my way. I didn’t make any mistake and Q3 run first lap was ace. It’s was a very, very good lap, I’m happy with that.”

Bottas gave his version, “Turn 1 was a bit inconsistent, we got the car right and I had a bit of a lock-up. The second run felt pretty good overall so I don’t know where the gap to Lewis was. I’m not too bothered as I know second place is a good place to start with such a good run-up to Turn One.

“I need to attack if I want to keep my title hopes there and nothing is over until it’s over so I’m definitely going to go for it. I know there will be opportunities to do it.”

Max Verstappen was best of the rest but lacked the firepower to really challenge Lewis, but the Red Bull driver nearly split the Black Arrows with his effort a mere 0.015 of a second off Bottas. He will line-up third on the grid behind the #44 Mercedes.

The Dutchman was pleased with the result, “It’s been a positive weekend – we came here and thought it would be really tricky. With P3 and being that close to Valtteri – although we are still half a second off Lewis – the lap was decent. I don’t think we can fight them in the race but I hope the weather comes into play, and it will make it more fun.”

Renault were the real surprise package of the weekend, they have clearly upped the ante considerably, all of the built-in-France PUs among the top ten, with Danel Ricciardo planting his in fourth place, eight tenths down on the top time and three tenths up on teammate Esteban Ocon in sixth.

Alex Albon was fifth fastest, on one of his better Saturdays but still lacking around half s second against teammate Verstappen when the chips were down.

McLaren’s Carlos Sainz will line-up seventh on the grid, the Spaniard a couple of tenths faster than teammate Lando Norris who was good for tenth.

In the McLaren sandwich on the timing screens, Racing Point duo Sergio Perez and Lance Stroll were eighth and ninth respectively on an afternoon in which more was expected from the Pink cars. 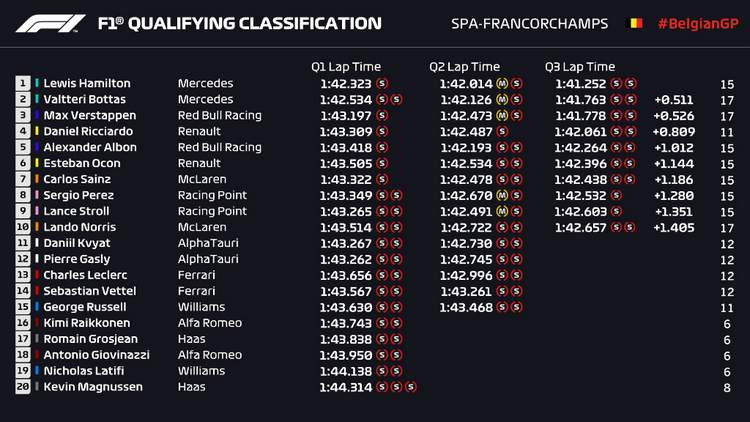