Spa FP3: Hamilton ahead of Ocon and Norris, Vettel slowest

At the very top of the FP3 timing screens it was business as usual with Lewis Hamilton fastest in the final free practice for the 2020 Belgian Grand Prix, but below the Mercedes driver’s name, it was a somewhat topsy turvy timesheet.

With rain looming over Spa-Francorchamps this weekend, the midday session remained dry but was characterised by traffic jams and aborted laps as the field of 20 struggled, somehow, to find clear air runs around the seven-kilometre ribbon of tarmac in the Ardennes.

Thus the times may appear meaningless, but it did provide a dress-rehearsal to what might happen in qualifying, whereby those caught napping will suffer the consequences.

Hamilton was wide awake and got the job done to end the session, a couple of tenths faster than Renault’s Esteban Ocon who also kept a cool head, got a clear gap to pop-up into second place on the timing screens with Lando Norris equally on it to put his McLaren third.

In contrast, Hamilton’s Mercedes teammate Valtteri Bottas was only good for fifth after, botching his hot-lap, with a time half a second slower than the sister car; ditto Daniel Ricciardo in seventh with a similar deficit to the other Renault, as well as Carlos Sainz in tenth, also five-tenths shy of his teammate.

It was a rare sight to see Alex Albon end up above Max Verstappen on the timesheets, the Thai driver fourth quickest, a tenth and a bit faster than the #33 Red Bull which ended sixth.

Racing Point duo Lance Stroll and Sergio Perez were eighth and tenth respectively, with less than a tenth between the pair that are expected to be a force in qualifying and the race.

Finally, the Ferrari fiasco has been amplified this weekend in Belgium, the FP3 session a sad picture of the situation that afflicts Maranello and their customer teams.

All six drivers were anchored to the bottom of the timing sheets, with only a Williams in their midst, at the end of the 60-minute pre-qualifying session, with Sebastian Vettel slowest of all – two seconds off the top time – and Charles Leclerc a few tenths faster in 17th.

Fastest of the Ferrari powered herd were the Haas due, with Kevin Magnussen 14th fastest and Romain Grosjean several hundredths shy in 15th – 1.5 seconds off the pace. 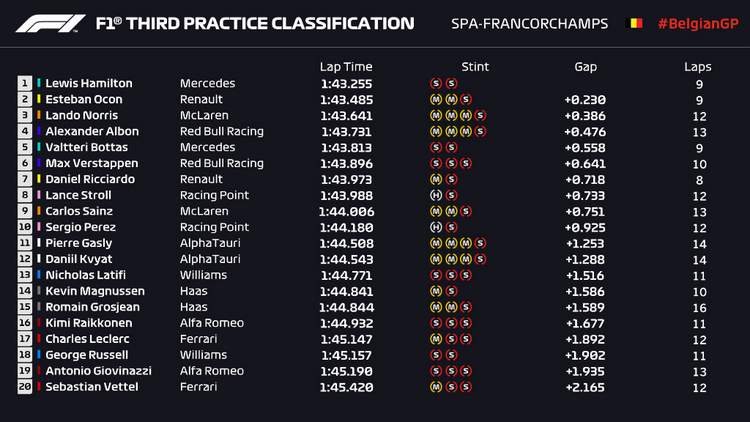