Hamilton: Red Bull a little quicker than us at the moment 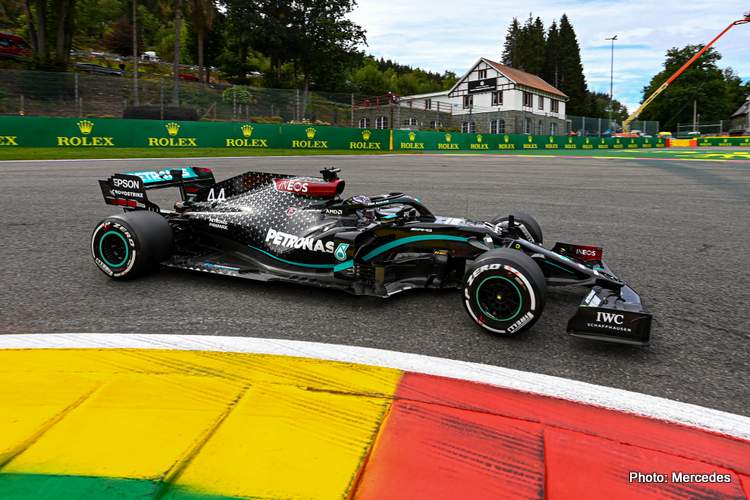 Lewis Hamilton is wary of the Red Bull threat after Max Verstappen topped the timing screens at the end of day one of the 2020 Belgian Grand Prix weekend.

The Mercedes driver and championship leader was only good for the third-best time and is thus convinced their main rival has the better package for Spa-Francorchamps.

Balancing power and aero is the secret to optimising setups for the legendary power-favourable venue, Red Bull achieved this on Friday while Mercedes were running in new PUs on the day, suggesting they were keeping their powder dry as they get the new bits up to speed.

Nevertheless, it was very close at the top with less than a tenth of a second separating the top three with Renault’s Daniel Ricciardo sandwiched between Max and Lewis at the top of the FP2 timing screens.

In his team’s practice report, Hamilton ventured, “It’s very close out there between Red Bull and us; I think they might be a little bit quicker even at the moment. Racing Point are also looking strong, they’re right with us as well and so was Daniel in the Renault.

“It’s really close with everyone and we have to understand why – whether they’ve taken a step forwards or we’ve taken a step backwards. So we’ve definitely got some work to do overnight, dig through the data and try and dial in the car a little more. But it looks like we’ve got an exciting weekend ahead of us.

“I love driving around this track, it’s incredible. Fortunately for us it was dry today, which gave us plenty of time to get a lot of running in and understand the car,” added the World Champion.

Birthday boy Valtteri Bottas, in the sister car, was three-tenths down on his teammate in the afternoon session but was unperturbed by the deficit at this stage, “I can definitely think of worse things to do on your birthday than driving this track. The first session was good.

“The second turned out to be a bit more tricky. It was nothing major, and I didn’t get the laps quite right, but I think we might have to revert some set-up changes back to FP1. We were struggling with understeer all day and didn’t really find a good solution for that.

“I think once the front end feels a bit stronger and I can get the car into the corners better, we’ll find some lap time,” predicted the Finn who will be looking to add to his opening-round victory and beat his teammate again.

Chief engineer Andrew Shovlin confirmed the engine changes, “We’ve had new power units in both cars today and some updated bodywork. So far that all appears to be working as expected.

“Both drivers have struggled a bit with the balance, mainly with a weak front end and we looked a bit slower than we normally do on a Friday even when the car seems to be working well,” he added.