Indy 500: A rookie could win it this year 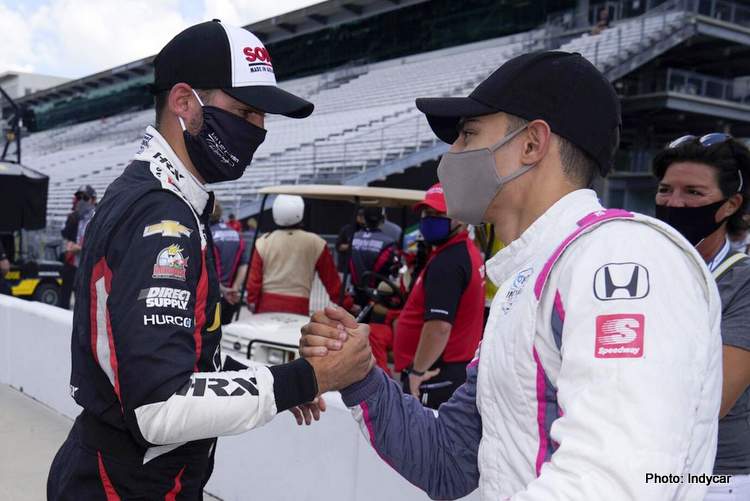 Five NTT Indycar drivers from five countries are preparing for their first Indianapolis 500 presented by Gainbridge on Sunday, eager to experience the race for themselves.

“I think as much as we want to simulate the race through practice and Miller Lite Carb Day coming up on Friday, there’s nothing like the real thing and experiencing an entire Indy 500 as a rookie,” said Oliver Askew, a Floridian who has his No. 7 Arrow McLaren SP Chevrolet slotted on the outside of Row 7.

Rinus VeeKay of The Netherlands will be the highest-starting rookie after qualifying fourth. He said earning a berth in last weekend’s Fast Nine Shootout during Crown Royal Armed Forces Qualifying Weekend was “like a win,” but the most difficult part of this visit to Indianapolis Motor Speedway awaits. Fortunately, he said he drives for Ed Carpenter Racing, one of the most competitive Chevrolet programs in recent years.

“You have to drive well, but you have to have a car that makes you confident to drive hard,” said VeeKay, the driver of the No. 21 Sonax Chevrolet.

VeeKay was honored Tuesday with the $10,000 Fastest Rookie Award from the American Dairy Association. Since the award originated in 1975, seven former award winners have gone on to win the “500” a combined 11 times. This year’s NTT P1 Award winner as the pole sitter, Marco Andretti, is a past recipient.

NBC’s broadcast of the race airs live beginning at 1 p.m. (ET). Central Indiana viewers will see the race on WTHR-13, and the Pennzoil Indycar Radio Network will have the call on radio, Sirius 211 and XM 205.

Mexico’s Pato O’Ward, who has the No. 5 Arrow McLaren SP Chevrolet on the outside of Row 5, said the greatest thrill from earning a starting spot “is just racing in the big show.”

“Everything about the Indy 500 revolves around winning – second and third is nothing,” he said. “Everybody wants to win this race.”

Canada’s Dalton Kellett, who has the No. 41 K-Line USA Chevrolet of A.J. Foyt Racing starting on the outside of Row 8, figures the start of the race will be the most trying for a rookie.

“The big thing for me is going to be that exciting start with 11 rows of three,” he said. “It’s going to be a tough race fighting for that ice-cold bottle of milk at the end.”

Spain’s Alex Palou, who qualified the No. 55 Honda of Dale Coyne Racing with Team Goh in the No. 7 starting position (inside of Row 3), said being a rookie means have realistic expectations for the race.

“I think the start (of the race) is going to be all new,” he said. “We’ve been doing practices with traffic, but we’ve never done a practice start. It’s going to be interesting have a row of three.

“I think just getting through the first two pit stops … to get the experience and try to improve every lap and keep up with these guys (is important). Hopefully we can fight for a top 10. Obviously, Everybody wants to win and finishing second means nothing, but I think finishing is the first thing you want to do, and then being in the top 10 is going to be a good thing to do.”

For the first time in the 111-year history of IMS, drivers will compete without spectators on hand due to protocols in place to fight the spread of COVID-19. VeeKay said drivers will perform as they did in last weekend’s qualifying session: They will focus on the task at hand.

“I didn’t think about anything but driving when the flag went down, and I didn’t lift for four laps,” VeeKay said. “I think that’s the key.”

The driver who reaches Victory Lane will be handed the traditional bottle of milk given to each winner since 1936. VeeKay was asked if he would incorporate a pair of wooden shoes honoring a Dutch tradition into his Victory Lane celebration, as he has in lower classes of racing.

“That I would really consider, yes,” he said with a laugh.

Ten rookies have won the Indianapolis 500 since its inception: