Sainz: Charles is a challenge that excited me about Ferrari 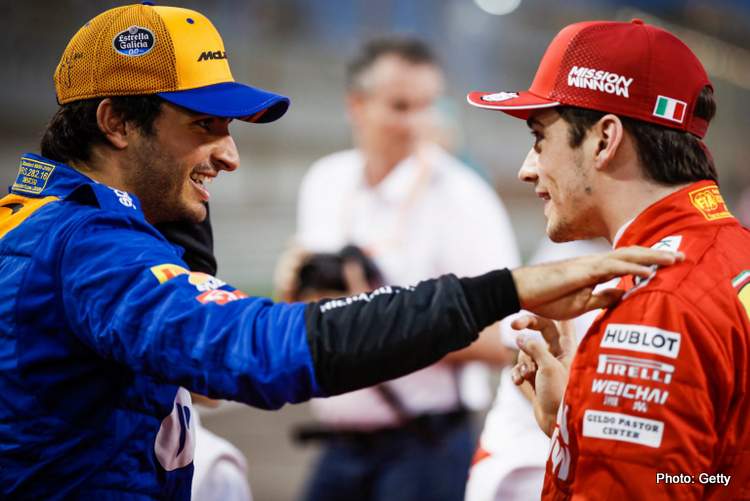 Carlos Sainz has spoken about the prospect of joining Ferrari next year in an extensive interview with The Race, in which the Spaniard opens up on the timing of his arrival at Maranello and has a message for his future teammate Charles Leclerc: “I  want to fight for a championship.”

First, the timing of his arrival may well coincide with the end of the Scuderia’s worst Formula 1 season in some time, their package at a dead-end and Maranello restructuring almost on a weekly basis while McLaren, the team he is leaving, are ever-improving and next year will be part of the Mercedes-brigade.

Upwardly mobile at Woking, unlike their counterparts where young Sainz is bound. And not much he or anyone can do about that.

Nevertheless, asked if he felt he could win the title with Ferrari, Sainz’s reply was well thought out, “In Formula 1, it takes time and the fact that you need to be in the right place at the right time.

“Hopefully I’ve taken the right direction going into the future. I’ll be part of an amazing team and I cannot wait to see what’s going on with Ferrari and to help with whatever I can help with as a driver with my inputs,” he ventured.

Secondly, rally and off-road legend Carlos Sainz, of the senior variety, has his dream come true with his son ensconced at Ferrari (is that not the dream of every petrolhead father?) and irrespective of the circumstances, the spotlight is always on the Reds.

Big Carlos is sure to know how to play the political game with the Italian team to ensure that his son gets equal treatment and opportunities to Charles when they go at it next year. He did not get his lad the drive for him to go there and play second fiddle, that’s not how Champions are wired.

It’s is a big ask though, the Little Prince Charlie, after all, is anointed by all of Italy to lead the team with this perception that his new teammate is just there to fill the second seat.

But Sainz is clearly going to Ferrari to fulfil his own ambitions, which is not to be a bit player in another man’s legacy, and he said as much, “In the future if I want to fight for a championship, which I want to, you get that scrutiny and analysis. But I’m also sure once you’re fighting for a championship, the pressure is insane.”

To win the title the first man he will have to beat is Charles, and he knows what he is for, “I’m aware that I’m going in new and he’s been there for three years there by the time I arrive and he will know the car, know very well the team.

“I’ve been in that situation before. For example, in Renault, when I arrived next to Nico [Hulkenberg]. I know it takes a bit of time before getting to know everyone and how to exploit the full performance of our car and how to build a bit your team and feed yourself into that team. I know what it’s like, I’ve done it before.

“I know it’s not going to be easy, especially with the talent of Charles and how good he’s been doing lately. He’s a great competitor, but it’s a challenge that excited me when I signed the deal.