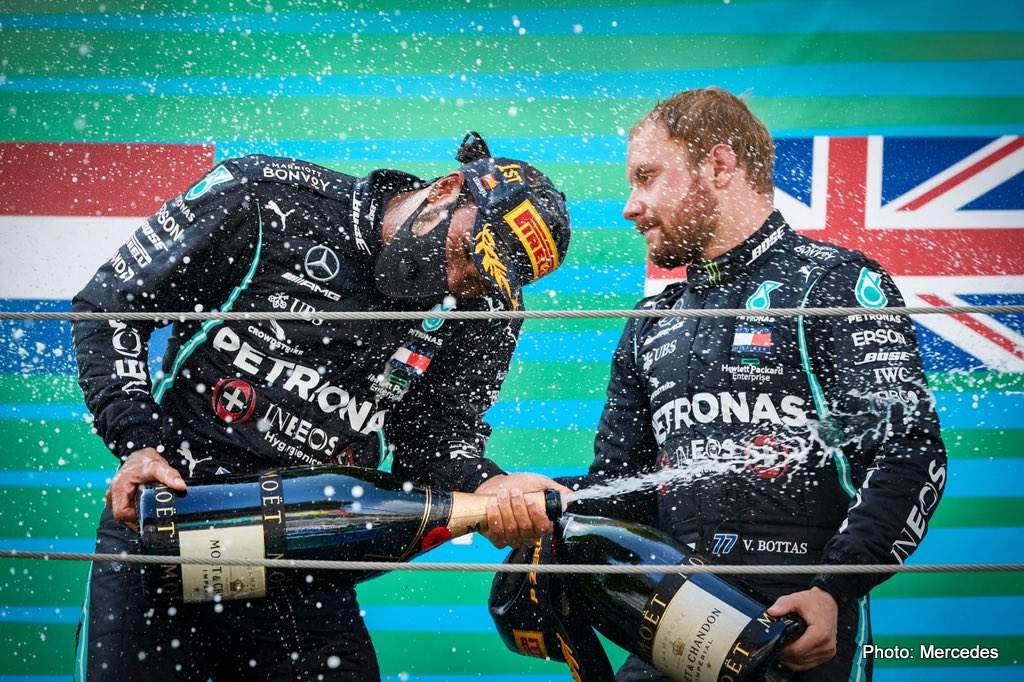 The telling difference between Lewis Hamilton and Valtteri Bottas was laid bare at the 2020 Spanish Grand Prix, while the Briton powered to an ethereal victory on the day, the Finn complained about his hot race suit.

Bottas was left reeling by his Mercedes teammate at Circuit de Barcelona-Catalunya on Sunday afternoon, in which Hamilton was as good as he gets while his teammate compromised his own race, from second on the grid, when he fumbled on the long run to Turn 1 at the start.

As a result, the #77 car was swallowed by the pack, endured some bumper-cars in the process and thereafter spent the rest of the race playing catch-up; second place on the grid reduced to third when the chequered waved with the other untouchable Mercedes half a lap up the road.

During the Sky F1 post-race chat on Sunday, F1 World Champion Nico Rosberg observed “Valtteri will be very, very disappointed with the start. We really saw every little weakness in his armoury out there.

“In wheel-to-wheel racing, just lacking a little bit of aggressivity, which we saw at the start and so he fell back behind [Lance] Stroll. Just opening the door on the inside and Stroll went right through.

“Then in the race pace afterwards,” added Nico.

Of course, Valtteri knew he messed up another opportunity to challenge Lewis, his title ambitions remain an elusive dream.

The Finn admitted afterwards, “Disappointed of course. It’s far from ideal. And I have no clue what the points difference is, but it’s way too big and I can see again the championship drifting away.”

Coupled to what is almost a waving white-flag, Valtteri’s demeanour post-race and on the podium was telling; Rosberg picked it up too, “Valtteri’s body language there was really resigned [after the race]. He can feel the championship chance slipping away from him once again.

“Lewis is on this incredible momentum and Valtteri just has to find a way to put it to an end with a bang, and put in a string of results,” added Nico who beat Hamilton in 2016, before announcing his retirement from the top flight a couple of days later.

Bottas started the season with a bang, winning the Austrian Grand Prix, but since then has been forced to watch the #44 car win four races, including the most recent one, in Spain, which Hamilton utterly dominated, irrespective of Valtteri’s mistake.

Nevertheless, there are positives from which Bottas feels he can draw inspiration from, “I had a good start in the first race and in every single race this season the pace has been there.

“In qualifying, I have been super close every single time with Lewis, sometimes he beats me, sometimes I beat him. It’s small margins,” explained the Perfect Wingman.

After the race in Barcelona, Sky F1 compared Bottas with Hamilton:

Heading to Round 7 in Belgium, Hamilton leads the 2020 F1 world championship standings on 132 points followed by Red Bull’s Max Verstappen on 95, in second, and Bottas third, 43 points adrift of top spot.

This weekend the F1 circus has a welcome break before gathering for another triple-header, starting with the Belgian Grand Prix on 30 August at Spa-Francorchamps followed by two weekends in Italy, at Monza and Mugello.