Inside Line: Toto to replace Chase? 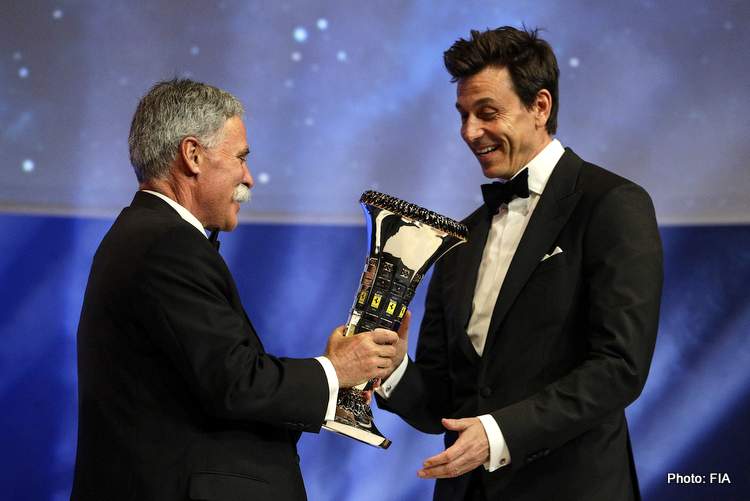 Joining the dots and crossing the T’s in the wake of a weekend packed with backroom intrigue amid a rather dull Spanish Grand Prix as a backdrop, the big news for me was Toto Wolff ‘unplugged’ during an incredibly candid team representatives press conference on the Friday of the weekend in Barcelona.

I, for one, am left contemplating what Wolff’s endgame really is and have come to the conclusion that we are being primed for an announcement that he will replace CEO Chase Carey, probably at the end of 2021.

The American was instrumental in the handover of Bernie Ecclestone’s cabal and setting the sport on its current course. As an outsider on arrival, he was perhaps out of his depth at times but nevertheless ticked all the boxes for the start-up the 70-year-old sport became with new ownership.

But it has long been argued that new energy is required to lead the investment and should be high on the Liberty Media HR agenda.

The one-year extension, to the start of 2022, for the new F1 rules package would give Wolff a final year with the mega-team he has built, while Carey’s contract reportedly has a 12-month extension clause which, if true, equals ideal timing for the handover of power between the pair.

Much of the speculation surrounding Wolff’s future grew a head of steam when he bought shares in Lawrence Stroll’s Aston Martin operation and the subsequent close relationship between Racing Point and the World Champions. Hence the Pink Mercedes saga.

But any thoughts of heading up that operation were dispelled when Toto lifted the lid on talk of his connection to Lawrence Stroll’s team, “The Aston Martin investment is tiny.

“I’ve bought a few shares in a car company that has no direct shareholding with an F1 team but is simply doing the branding on the Red Bull car this year and on the Racing Point next year. I see it as a good investment. I like the products, the new management team is fantastic.

“And I have no board seat, which was agreed with Daimler, and no other involvement. I’m not a consultant, I’m not an executive and I’m just watching from the sideline what happens.”

At the same time, under his watch Wolff can take credit for launching a number of careers in F1, starting with backing Valtteri Bottas since his early days through to establishing an impressive pipeline of other young drivers developed by Mercedes, including the likes of Pascal Wehrlein, George Russell and Esteban Ocon.”

Nevertheless, it is an impressive motor racing portfolio Wolff has under his command, apart from the mighty Mercedes Formula 1 operation he also oversees the company’s Formula E effort, has a say in the works and semi-works GT efforts and headed the DTM programme when they were involved

Throw into that his wife Susie Wolff’s Venturi Formula E team and the Williams shares, what we have is the most powerful man in motorsport. The sport’s Kingmaker.

Hence the question: What is Wolff’s endgame?

At 48 he is still very, very young for such a successful entrepreneur. His involvement in racing began in 1992 in Austrian Formula Ford in a driving career that saw him journey through the ranks of GT racing including a spell at the legendary Walter Lechner Racing School, and winning the 2006 Dubai 24 Hours in a Red Bull backed BMW.

As a team boss he has already won 12 F1 world titles (make that 14 by the end of 2020) with the team he was key to building along with Ross Brawn and Niki Lauda.

Reading between the lines this weekend, the cat may already be out-of-the-bag among key folks in the organisation, including Lewis Hamilton and Valtteri Bottas, as well as stakeholders in the paddock.

Up until now, Hamilton’s career seemed intrinsically linked to Wolff’s, but not so the World Champion surprisingly insisted that whatever his boss did would “not determining whether or not I stay.”

“It’s not just one individual. I think everyone has to do what’s best for them. We’ve done so much already together in this period of time. I hope he stays because it’s fun working with him, and it’s fun negotiating with him and fun having the up and downs.

“So, I’m truly grateful to Toto and I’ll be fully supportive in whatever he decides to do,” added Lewis.

Teammate Valtteri was reading from the same script, “Toto has been a really important part of the team and being a big part of helping the team to get to the state where it is now. But, I would definitely sign with the team even though Toto wasn’t here because, as Lewis said, it’s not about one person but he is a very important man.”

Very important indeed, Wolff has been the key architect of the current Mercedes outfit, the most potent and successful teams in the history of Formula 1. Under his watch, apart from the dozen titles, they have scored 97 F1 victories and their drivers celebrating on the podium no fewer than 202 times, with no end in sight.

Coincidentally, or not, Wolff has taken something of a leadership role in the divisive Renault versus Racing Point soap-opera. Reports of him convening with his fellow team bosses as chief mediator during the Spanish Grand Prix weekend were confirmed by more than one of our Barcelona paddock sources.

Should Ferrari not veto such an appointment, and Toto indeed takes the top job, with youth on his side, my take is that there are few better qualified to run Formula 1 at this point in time.

I warn that this piece is purely speculative and based on a personal hunch which puts me out on a limb but I will add, as an ardent F1 fan, I sincerely hope that this would come true. We would be well served for the long-term.