Hamilton: I don’t really know what to say to those things 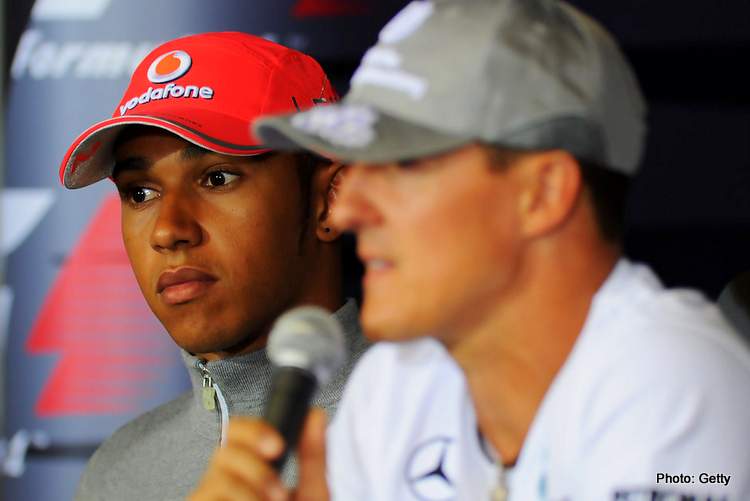 Lewis Hamilton celebrated on the top step of a Formula 1 podium for the 156th time after comfortably winning the 2020 Spanish Grand Prix and thus becoming the driver with the most top-three finishes in the history of the sport at the highest level, surpassing the great Michael Schumacher.

Inevitably he was asked the predictable cliche question during the press conference after the race in Barcelona on Sunday: You’ve passed Michael Schumacher’s all-time F1 podiums of 155. What does that mean to you?

“I don’t really know what to say to those things,” replied Lewis. “I think… yeah… it’s just very strange. All of us drivers here grew up watching Michael and one day being here.

“What is happening right now is far beyond what I dreamed as a kid. I’m incredibly grateful for the opportunity that I’m given every day. I think Michael was obviously an incredible athlete and driver.

“I just always feel really humbled and honoured to be mentioned in the same light as a driver like him and Ayrton and Fangio. It’s pretty cool. And I hope the Hamilton family are proud also,” added the Mercedes driver.

More records are set to fall in favour of Lewis who first emerged on Michael’s radar in 2007 when the German had quit F1 for the first time, after his stellar career with Ferrari.

Schumi said of Lewis in an interview at the time, “He is a very talented driver, none of us are surprised he is that successful, seeing his GP2 season last year (2006) which I followed closely because the team owner and manager Nicolas Todt is obviously very close to us.

“I just met Lewis briefly in Turkey and had a quick chat with him In Turkey where he had a tremendous race, so for me it is not a surprise he shows up the way he is doing, its a surprise that he does it that consistently so early.

“We cross fingers he keeps it up,” keep it up Hamilton has, this year he is set to tie Schumacher’s record of seven F1 world titles and very likely will break the record 91 victories the German scored in the top flight.

Of course, history shows that Schumacher returned to spearhead Mercedes return to F1 while Lewis – with McLaren in 2009 – was not impressed by the arrival of a ‘new’ illustrious rival on the grid.

And told Reuters as much at the time, “It doesn’t do anything for me whatsoever. He is a world champion and you want to be up against a world champion. It is always a privilege to be on the same track as him as it is having him in the sport.

“It would be special if I was on the track with (the late Brazilian champion) Ayrton (Senna), for me, but everyone has their own points of view. When I leave F1 I want to be remembered as one of the best drivers of all time,” claimed Hamilton with one F1 world title under his belt in those days.

Schumacher’s return with Mercedes did not bear the fruit desired, after a couple of years Niki Lauda convinced Hamilton to ignore the doubters and join the Mercedes start-up effort led by Toto Wolff.

A daring poach then when the German team were behind the Woking outfit and many pundits and former drivers predicting doom and gloom for Hamilton. This, in turn, left Schumi with little option other than to retire.

Michael explained his decision to retire in a 2009 interview, “The special moment is that the team have found an option with Lewis that helped me find the decision because there was an option for me to retire at an earlier stage.

“But I have decided to retire at the end of the season. I still feel I am capable of competing against the best but the time sometimes comes to say goodbye and this time it might be forever.”

“It’s not painful. It is a relief to me, I have done so much in this sport but when the battery is going low the first time, and then it is doing so again, and I am older, it is something I am looking forward to. There are plenty of other things in life you can do and now is the time to change that.”

Schumacher today is reportedly wheelchair-bound and out of the public spotlight since his life-altering skiing accident in 2013, while Hamilton continues to be at the peak of his game.

His 88th F1 victory at the 2020 Spanish Grand Prix was one of the most dominant and comfortable of his career – the end is nowhere in sight.