Bottas: Guys, you know these overalls are way too hot 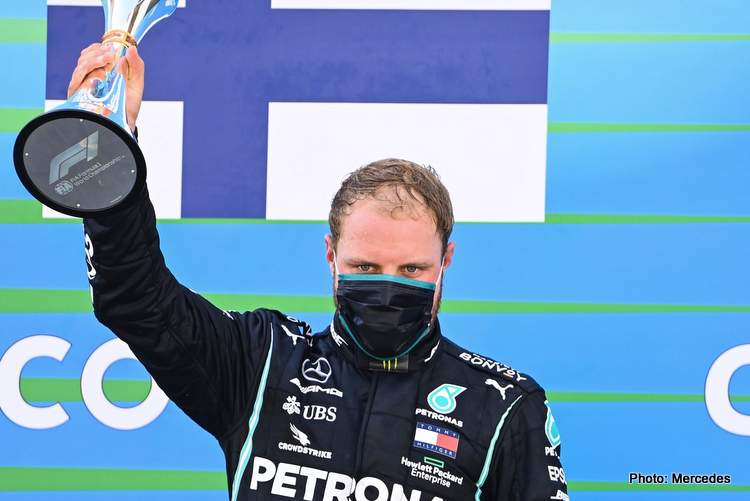 The man from Finland, a country of long winters, Valtteri Bottas suffered in the heat of the 2020 Spanish Grand Prix, claiming that the black overalls – to match the livery Mercedes use for their #BlackLivesMatter message – cost him three kilograms in the race!

Bottas finished third on Sunday in Barcelona, a fumbled start cost him dear and second-place on the grid turned to third at the end of a dull 66-lap race, which his teammate Lewis Hamilton won at a canter and by a comfortable margin, unchallenged.

The #77 car chased hard all afternoon after the botched start, the driver reporting afterwards, “It was really hot in the car. This year, it’s been even hotter in the car. Obviously, we had to change the colour of the overalls. And it’s known that black colour takes more of the heat, especially when there’s direct sun.

“I don’t know any number or facts, how much actually black versus white is in terms of temperature difference, but this year, it’s been really hot in the car. And also there’s a new homologation this year for the overalls, so they are thicker, and the underwear is thicker, so I don’t know how much effect that has.

“It was just so hot so I said, ‘Guys, you know these overalls are way too hot.’ And for sure, white would be cooler in terms of temperature, for example, I lost three kilos in the race, which is quite a lot.

“And that’s where it can start to affect performance. I know that from all drivers I’m one of the fittest if not the fittest, so I can take it, but it’s never comfortable and there’s always things that we can improve,” added the Mercedes driver.